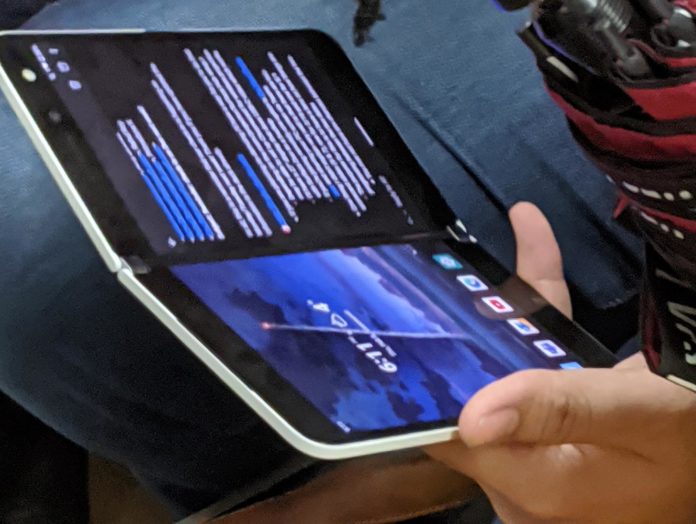 The images of Surface Duo, the dual screen smartphone that will be Microsoft’s first Android device, were shared on Twitter. The camera attracted attention in the images.

It is known that many smartphone manufacturers have been working to enter the foldable phone market in recent years. Microsoft, which has not achieved its desired success in the smartphone market before, aims to be included in this flow with a dual screen device.

Surface Duo, which is expected to be one of the most interesting devices of 2020, will also be Microsoft’s first Android device. Thanks to its unique hardware design, the device is said to be more durable than other foldable phones.

First Duo of Surface Duo:
While the first real image of the new Surface Duo appears on Twitter, the changes made in the design since the first announcement stand out. The most notable of these changes is the new camera. Israel Rodriguez saw the device while working on a train in Vancouver. It is assumed that the person using this device is a Microsoft employee. Although the device is almost identical to the previously announced design, a white dot stands out next to the front-facing camera.

This white point can be a temporary thing, for example a label. Another possibility is that a flash may have been added next to the camera. If this is the case, Microsoft may be working on the main camera. As far as is known, Surface Duo does not have any rear camera.

Single camera design:
The fact that the Surface Duo has a single camera raises the question of how to take photos in different directions. Perhaps, as we have seen on some 2-in-1 Chromebooks, you will be able to rotate the part of the camera with the camera’s display screen facing you.

Regardless of the white dot on the side of the camera, the image of the phone is quite remarkable. Microsoft released the SDK (Software Developer Kit) preview last month so that developers could start developing applications for the device early. What do you think about the new Surface Duo? Do you think Microsoft will find what you’re looking for this time?

I May Destroy You and are canceled once