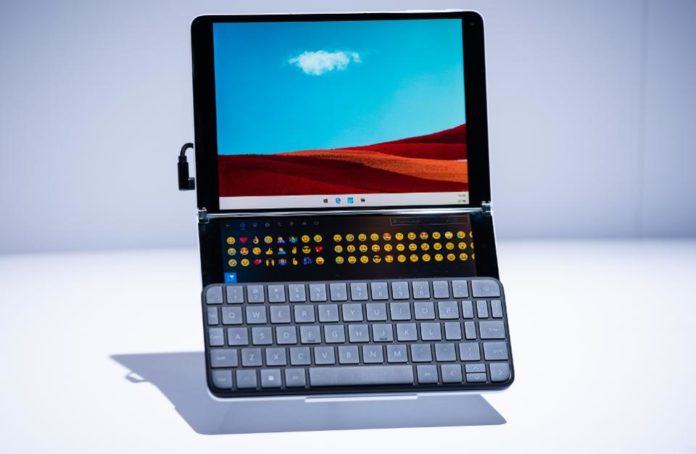 A patent application by Microsoft shows that the company is considering the game controller plug-in for the dual-screen Surface Neo. With its large screen, Surface Neo can offer a portable console experience.

Microsoft attracted attention in October 2019 by announcing the dual screen Surface Neo. Some design features of the device were also shown during the announcement. A new patent by Microsoft shows that Surface Neo may have many different features than those described.

Microsoft briefly introduced the xCloud gaming service along with its dual-screen device at its Surface event, and its patent application focuses precisely on this point. According to the patent application, Microsoft Surface Neo can also appear as a gaming and performance device. Microsoft has patented a Surface Neo plug-in that includes a touchpad or game controller.

The patent details most of the features that Microsoft has demonstrated in the introduction of Surface Neo, but it is also stated that the magnetic keyboard part can be used as a game controller. In the example above, the device that can be connected to the device is shown as a keyboard that can be added magnetically. On the other hand, it is explained that the input device can be added to the device as a touch panel or game controller.

The gaming accessory that Microsoft will offer for Surface Neo can provide a better gaming experience with the xCloud streaming service. The company seems to have turned to a modular solution, as the 5.6-inch device doesn’t have enough room for physical controls. In addition, the Windows 10X operating system on the device will provide flexibility in terms of accessibility.

Surface Neo may be targeting a different market by offering a more advanced gaming experience. By making Surface Neo a portable experience like a handheld console, Microsoft can offer an attractive option for gaming streaming.

Apple is cornering: Russia after China!

the newcomer of the market threatens Ethereum

Booba and Neymar with great abs for Puma

Scientists Develop a Device That Crosses 2 Major Barriers to Quantum...

Using WhatsApp on iPhone is changing!