Home Entertainment Microsoft Flight Simulator: they compare the map without internet versus online 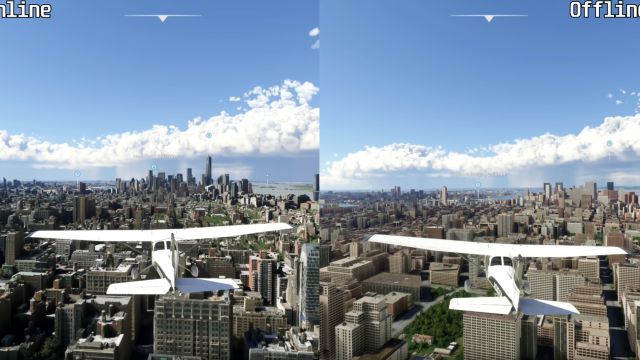 Microsoft Flight Simulator on Xbox Series X | S allows an additional download to have the maps without an internet connection. This is how they are compared to those available online. Microsoft Flight Simulator has the ability to store map data without an internet connection. This way you can access the game without constantly depending on the network flow. However, along the way you will lose quality in the precision of the terrain. One user has gone to the trouble to compare what the two modes look like in real time.

Cycu1 user on YouTube has compared the contrast of the two modes on the same map. The New York part speaks for itself. Offline, the buildings that are generated are the generic defaults, and most of the iconic buildings are missing. Quite the opposite of online: the buildings are the real ones, they use the aspect that can be seen in their streets.

In the final part of the video you can see a small framerate test; the small drops to 29 fps in online mode may be due to data loading, so it does not cloud the experience.

We must emphasize that the Xbox Series X | S version does not require installing the two available packages. The base game with all world updates requires 42.2 GB; nothing more. On the other hand, the offline mode, that is, having the maps inside your hard drive, means an additional 59.7 GB space. Yes, only the maps without internet occupies more than the base game.

On July 27, Microsoft Flight Simulator literally landed on Xbox Series X | S. After almost a year of its original launch on PC, Asobo has optimized its simulator to adapt it to the consolation field. The result is “quite a technical achievement” for the new generation machine. “We are facing a true new generation game that amazes at the sight and that reaches all types of users easily through your Xbox controller”, we said. You can read the full analysis at this link.