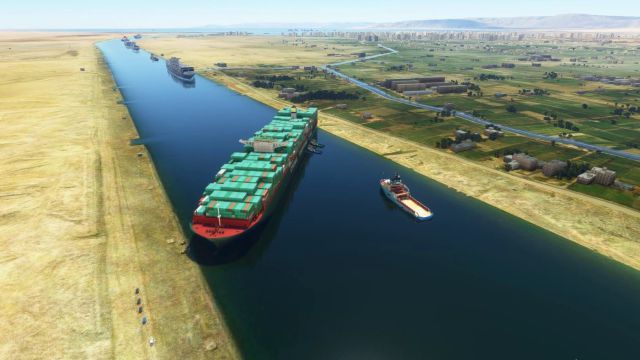 The Microsoft Flight Simulator community creates a mod that allows you to see from the sky what the current situation of the Suez Canal looks like.

Microsoft Flight Simulator has not been without controversy around the Suez Canal. Thanks to the Asobo game community, you can now have a privileged view of the ship that has put the global economy in check.

How to visit the Suez Canal in Microsoft Flight Simulator

We must emphasize that the virtual presence of Ever Given is due to a mod created by the user Zepingouin35. You can find the file through this link as part of the creations on the flightsim.to website. Once you add it you will be able to witness the route something more similar to real life.

Although this mod only presents the ship, another user (FlyBoyRez1) has decided to give the scene even more realism. How? Well, adding maritime traffic both within the channel and in the area prior to its entry. As we can read in its description, the mod introduces official cars parked next to the ship, a couple of excavators, a sea rescue boat and all the ships in the northern and southern part of the canal. You can find it in this link.

We remind you of the function of the game that integrates the coordinates of Bing Maps. Here you can see our tutorial on how to fly from a specific area of ​​the map, regardless of whether or not there is an airport nearby. Flying from this function allows you to start the game at the exact point you entered.

To fly over the Suez Canal you must add the following coordinates in the “Search” section of the World Map, where you choose your flight.

When you place it and start the route, you will appear near the city, right at the point where the Ever Given is located. We recommend you take a light plane (one of the first) to help you maneuver around the area. The views will speak for themselves.