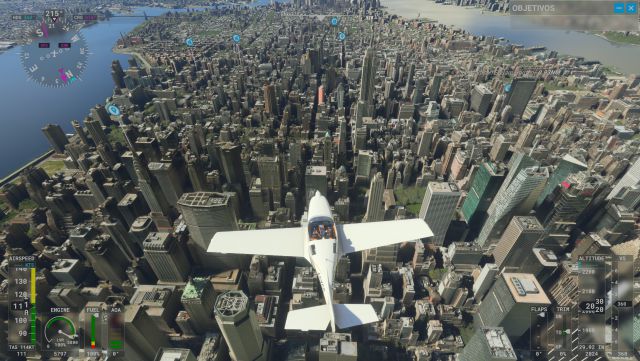 We analyze the debut of Microsoft Flight Simulator on Xbox Series X | S. Asobo optimizes its aerial simulator to transfer it to the new generation of consoles. Microsoft Flight Simulator finally lands on console. Asobo’s ambitious simulator allows Xbox Series X | S users to enjoy this trip around the globe at the click of a button. In 2020 it seemed to us that we were facing the aerial platform of the decade; Almost 12 months later and with a controller in hand, his debut in the new generation is at the height of the excellent work that the team has done during these months of support.

Easy and within everyone’s reach. That would be our summary after having made more than a dozen trips from our favorite points. From leaving over the Santiago Bernabéu stadium to landing at Heathrow airport, not to mention a walk that is never missing: flying over the Manhattan sky with real weather. Here’s what to expect starting July 27.

Accessibility, with all the letters

One of the elements that differs from the original PC release is how accessible it is to less experienced users using the traditional gaming method. You grab the Xbox controller and you don’t have to worry about anything else at all. Do you want to take a quick trip from anywhere on the planet? You can. Looking to go further to learn how to control a Cessna plane? Too. Everything works in an agile way.

The menus of the tutorial part have been redesigned to take a somewhat simpler count, even adding new stages that cover the spectrum of what we should know rudder at the ready. By default, the aids in the airspace are marked in easy difficulty, but you have to adjust it, as it happens on PC. And if that weren’t enough, you can plug in the peripherals designed for console and extend your experience beyond the sticks and triggers.

Im Soo Hyang Talks About The Symbolic Meaning of The Characters...