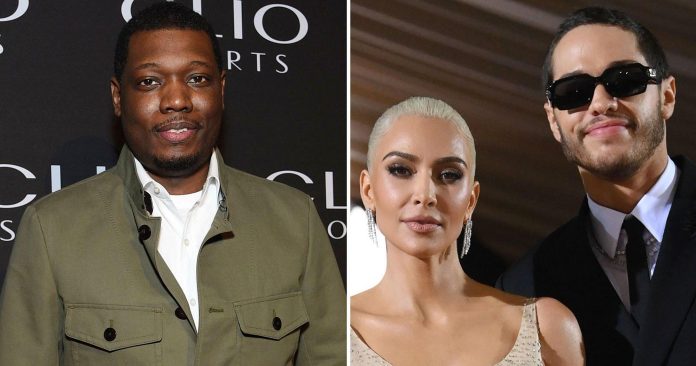 Are you playing matchmaker? Michael Che may have written Pete Davidson’s first kiss with Kim Kardashian, but the “Saturday Night Live” star is still waiting for thanks.

“Definitely not. He didn’t mention it,” Che, 39, said during an interview on SiriusXM’s “The Howard Stern Show” on Wednesday, June 8, before joking, “Actually, this is the first time I’ve heard that they’re dating. Is it serious?”

In October 2021, 41-year-old Kardashian and 28-year-old Davidson appeared together in several sketches when she debuted on SNL. They starred in one of them about Kourtney Kardashian and her current husband Travis Barker, and then kissed during an Aladdin-themed episode.

The couple were later seen on several dates over the next month and were photographed holding hands in Palm Springs, California, which confirmed their relationship. At the time, a source exclusively told Us Weekly that Kardashian and Davidson are “serious” about each other, adding: “Things definitely escalated quickly, but in a healthy and fun manner. Right now, they’re just enjoying their time together and seeing where things are going.”

The Skims founder, who filed for divorce from Kanye West in February 2021, later revealed that her 45-year-old husband “left” during her performance on SNL. “I haven’t spoken to him since. He’s upset by the fact that I used the word “divorced” — so he wanted me to say the word “filed for divorce,” she told Khloe Kardashian during the May episode of The Kardashians. “And he was upset that I also said he was a ‘rapper’. He said: “I’m much more than a rapper. I can’t believe you said “rapper”.

Earlier this month, Kim also offered viewers a glimpse into the beginning of her romance with the comedian. “So that’s how it happened with me and Pete. I starred in the show “Saturday Night Live”, and then when we kissed in the scene, it was just the atmosphere. I thought, “Oh, shit. Maybe I just need to try something different,” she recalled on the Hulu series. “But Pete doesn’t come to my after party, and everyone was at my after party. He doesn’t give me the time of day.”

According to the native of California, it was she who made the first step. “So a few days later I called the SNL producer and asked, ‘Hey, do you have Pete’s number?’ I texted him,” Kim told the cameras. “I didn’t even think, ‘I’m going to have a relationship with him.’ I was just thinking: “I heard about this BDE, I need to get out of there.”)”.