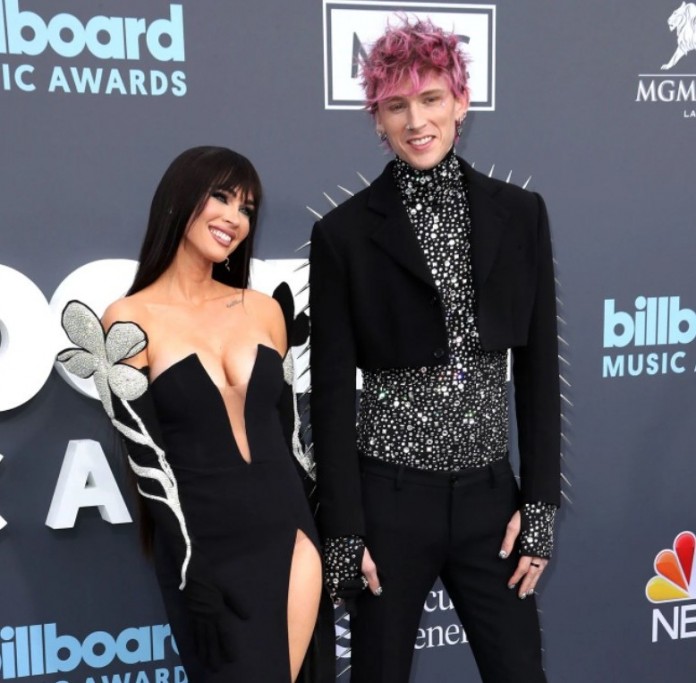 Just when you think the “twin flames” have shocked you before! Megan Fox and Machine Gun Kelly’s weekend in Las Vegas at the Billboard Music Awards hit the headlines for several reasons, including the fact that the actress shared dirty details.

“This blue outfit was expensive because we just cut a hole in the crotch to have sex,” Fox wrote, adding a smiley face of a shrugging girl.

The response she received read: “I hate you.” I’ll fix it.”

Earlier in the evening, Fox and 32-year-old Kelly walked the red carpet at BBMA.

“I feel great! I don’t have to do anything — I’ve done all my work. He still has to perform,” said Fox, who was wearing a high—slit David Koma dress and gloves. on the carpet.

“It’s a great honor for me that they allowed us to make a fan—favorite song instead of a single,” said the musician, dressed in a pointed Dolce & Gabbana suit, before his performance of “Twin Flame”. “Therefore, it is a great honor for me to show my skills, and not what is being played on the radio. It is clear that.”

When Kelly, whose real name is Colson Baker, took the stage at the MGM Grand Garden Arena in Sin City on Sunday, May 15, he sparked rumors that he and Fox had secretly married.

Fox and Kelly, who have been dating for more than two years, got engaged in January. Despite the fact that on stage he called the star of “Transformers” his wife, during an interview on the red carpet, he called her his “bride”.

“My fiancee’s birthday is at midnight, so we’re celebrating her wonderful life here on planet Earth,” he told E!.

During another interview on the red carpet, Kelly revealed that he wrote “Twin Flame” two years ago.

“He wrote it for me, and I, like, ran home, and my mom stayed with me at that time. And I’m like, “Mom, listen, Colson just wrote me this song.” And I put it on for her,” Fox recalled in an interview with Access Hollywood on Sunday. “I put it up for her and she said, ‘Well, this is my future son-in-law.’ I know it right away.”

Scroll down to see more photos from their walk in Las Vegas:

The couple chose black for BBMA.

No wonder Fox and Kelly couldn’t tear themselves away from each other on the carpet.

Kelly described her outfit as an “emo cactus 🌵 🔪 ” via Instagram.

The “Bloody Valentine” singer told his followers that he “had to” end the night in a pink limo.

Fox seemed excited when Kelly performed for her. “I’ll see you in a dream / This changes everything / Now I have to free you,” says the text of “Twin Flame”.

The two have been calling each other “twin flame” ever since they first met. “I think when you find people who get together, whose souls knew each other, who came here to do it again, there’s something undeniable about it,” Fox recently told Glamour.

“An introvert in Vegas for three days during the eclipse season… just crying SO much in the shower,” Fox wrote along with a series of photos, including a screenshot of a text message, from the weekend.

BTS’s Jungkook makes a cute mistake and it has a powerful...

Preparing for the serial or movie of Sony 10 PS license