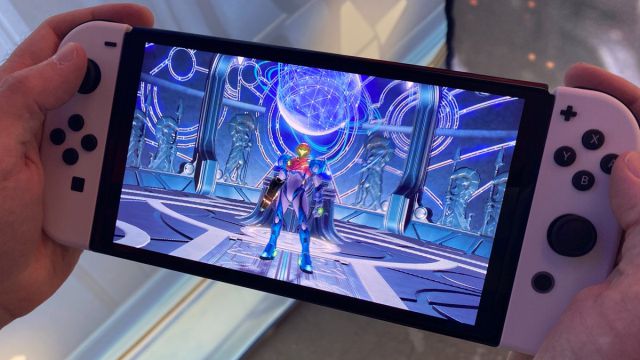 Metroid Dread: The new Metroid will be launched on the same day as the Nintendo Switch OLED, whose large screen will allow you to see all the information in greater detail. Metroid Dread is one of Nintendo’s big releases for this year. The fifth episode of the two-dimensional saga, the last of the story arc that began in 1986, will hit stores the same day as the Nintendo Switch OLED, a console whose improvements in portable mode seem designed for titles like this one, deeply rooted in the game with the screen. In hands. Stephen Totilo, member of Axios Gaming, has shared an image in which we can see what the new adventure of Samus Aran looks like on the seven-inch panel and OLED technology of the new console.

After testing the Nintendo Switch OLED for more than an hour, the first conclusion we draw from the session is that this large screen and better image quality (color, sharpness, vividness, brightness…) favors any game in portable mode. Especially those that include a lot of information on the screen; for example, turn-based strategy titles like Fire Emblem: Three Houses or adventures like Pokémon, Super Mario and The Legend of Zelda. Similarly, works in the style of Mario Kart 8 Deluxe or Luigi’s Mansion 3 will also better present their visual display.

The launch of Metroid Dread that same day makes the MercurySteam title the biggest claim of the season on the hybrid console in the absence of another great commercial titan such as Pokémon Shiny Diamond and Shining Pearl this November 19, destined to sell millions of units and bring back those players who spent dozens of hours in the Sinnoh region.

If you have doubts about which model best suits you, in this comparison we put Nintendo Switch, Nintendo Switch Lite and this new member of the family face to face.

Qualcomm will continue its partnership with Samsung and reinforce the importance...