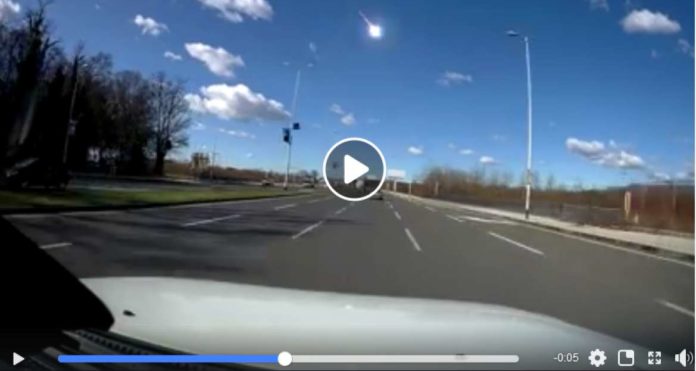 Meteor video recently recorded in Croatia became viral on the Internet in a short time. A video shared on Facebook clearly demonstrated the explosion of meteorite as it approached Earth. The country’s astronomy institution continues its research on the incident.

A celestial incident that took place in the past days has caused a little fear to the people of the region where it can be observed. A meteor observed by the public in Croatia is reflected in the cameras of some citizens. The fall of the meteorite, which did not cause a harm, became viral on the Internet.

The event, which took place last Friday, was clearly reflected in the camera of a Facebook user. The images obtained at 10.31 local time brought hearts to the mouth at first, but fortunately no harm occurred. Because the object exploded while still at a very high position, and only small remains could reach Earth.

Facebook video where the event can be seen clearly:

According to geological investigations, between the meteor, Istria and Novo Mesto regions; exploded in a very high position. Some sources allegedly dropped parts of the body from the blast, near the border with Croatia and Slovenia.

Meteor fragments still in demand
The Croatian Astronomical Union says that this brilliant object is seen from many regions and countries; He reported that the fragmentation of the body occurred at least 30 kilometers above sea level. It took a few seconds for the weather to explode. This explosion made itself felt by shaking the windows of the houses in some areas.

The Union noted that there is a need for seismological data and more security camera recordings from Croatia and Slovenia to determine a clearer explosion site. The Croatian Astronomical Union, which reported that the disintegrated meteorite fragments may have reached the Earth, reported to the public that the location of these fragments is not yet known. No meteor found in the research process will gain any value without being examined by a specialist. Whether the potential meteor stones belong to the falling object in the near future will be learned by the experts’ examinations.