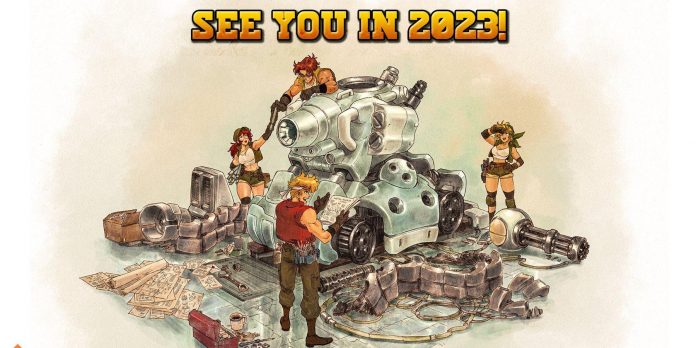 Last year, an amazing revival of classic intellectual property was announced in the form of Metal Slug Tactics, a strategic role-playing game inspired by the classic 2D action series SNK. Although fans were initially surprised that the long-dormant series had changed genre, it didn’t take long for many to warm up with the return of their favorite franchise, especially considering that it comes from Streets of Rage 4 and Teenage Mutant Ninja Turtles: Shredder’s Revenge. publisher Dotemu. Although the game was expected to be released later this year, Dotemu announced that Metal Slug Tactics has unfortunately been postponed until 2023.

The Metal Slug series originated as a 2D action series developed by Nazca Corporation before its merger with SNK Corporation in 1996. The series tells about a group of soldiers who repel the invasion of the military, aliens and zombies. The gameplay of the series consists of a “run and shoot” platformer combined with a “shoot-in-em-up” mechanic.

Metal Slug Tactics, the first game in over 13 years, was first announced at the Summer Game Fest Kick-Off in 2021. The game is currently in development at Leikir Studio, a French developer known for indie games such as Rogue Lords and Wondershot. In February 2022, the studio was acquired by the European publisher Focus Interactive, and in August 2021, Dotemu publishing house was acquired.

Metal Slug Tactics gameplay was shown at an Indie World event hosted by Nintendo in August 2021, where its release on Nintendo Switch and PC was confirmed. After this event, Metal Slug Tactics became very quiet, with virtually no updates during 2022. Today Dotemu announced, along with fresh art from the game, that Metal Slug Tactics has been postponed until 2023. No further details about the release were provided.

Despite the delayed release of Metal Slug Tactics and the delayed release of Midnight Suns by Firaxis Games, which was announced earlier this week, fans of strategic role-playing games still have something to expect this year, as games such as The DioField Chronicle and Tactics Ogre: Reborn are confirmed for release. in 2022. It should also be borne in mind that due to the ongoing Russian-Ukrainian war, many developers are afraid to release games based on a military setting, especially carefree ones. This is the reason why Nintendo and WayForward’s Advance Wars 1+2 Re-Boot Camp have been postponed indefinitely and most likely won’t even be released in 2022, despite the fact that it was originally planned to be released back in April.

In any case, Metal Slug Tactics promises to be an exciting and fresh mix of tactical role-playing gameplay with the distinct visual flair that the beloved SNK series is famous for, so giving it more time in the oven can only be a good thing, considering how solid the gameplay teasers were.

Metal Slug Tactics will be released on PC and Nintendo Switch in 2023.

Alden Ehrenreich as Indiana Jones The Art of Artificial Intelligence Is...