Home Sport “Messi is the best footballer I’ve ever played with,” says Villa before... 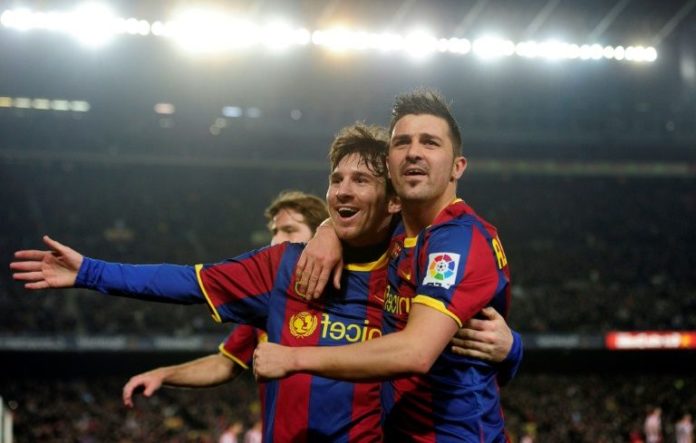 David Villa consumes his last weeks as a footballer. After announcing his retirement on November 13, the top scorer in the history of the Spanish team (59 points), takes a look back, a quick tour of his career, in an interview with the AFP.

He confesses that two names have left his mark, Leo Messi, with whom he agreed in Barcelona, ​​”the best footballer I have ever played with”, and Luis Aragones, with whom he won the European Championship, “the coach who most marked me out of the field “.

The Spanish striker of almost 38 years, ambassador of the Booking.com portal for Euro-2020, wants his last match to arrive on January 1 by raising the Emperor Cup with his club, the Japanese Vissel Kobe. To do this, he must first win in the semifinals, on December 21, at Shimizu S-Pulse. It would be a perfect farewell for a player accustomed to raising trophies, with a World Cup and a European Championship with Spain and a Champions League with FC Barcelona in his medal winners, among others.

Q: Your withdrawal is approaching. How do you imagine that last game? Will you miss any tears?

A: Let’s see. Hopefully it is the final of the Emperor Cup and that we can win. If we win the Cup, little will I think about whether it is the last game. I will be more to celebrate the title.

Q: You have just bought a franchise in American football, Queensboro FC, and you have soccer schools in several countries, in Europe, Asia and America. Haven’t you thought about being a coach?

A: There was no problem between us. He is the best player I have ever played with.

Q: David Villa always speaks very well of Luis Aragonés. Did you score more than coaches of the caliber of Pep Guardiola or Diego Simeone, whom you also had as technicians?

A: Luis marked me a lot off the field, gave me things, tools that not only helped me as a footballer, but also as a person. Everyone helped me the same football, but Luis helped me a lot on the personal issue.

P. Soon comes the Eurocopa-2020. You are an important part of a Spanish generation that won three straight titles, two Euro Cups and one World Cup. Can another similar generation emerge again?

A: I think you don’t have to think much about whether another generation like that is going to come out. Now there are good players, a good squad, with veterans, and also with young people with a huge future. I don’t think you have to look to the past. Now we have to think about the present and the future.

Q: What has he lacked to achieve in the world of football?

Q: His father, who was a miner in Asturias and whose dream was to see his son as a footballer, must be proud of his son’s career.

A: Everything that I was taught as a child, both my father and my mother, on a personal level, has made me what I am now as a person. They helped me and led me on the right track. My father has a lot of responsibility in the football field, especially since he has always accompanied me as a child, it has always been a very important support for me. Obviously, I owe them both very much both personally and professionally.

Q: You have been a soccer globetrotter, with five professional teams in Spain (Sporting de Gijón, Zaragoza, Valencia, Barcelona and Atlético Madrid) and three others on different continents (Mebourne City, New York City and Vissel Kobe). Why that traveling character?

A: I have always liked to travel and thanks to football I have been able to do it very much. I have been fortunate to play in different teams, different countries, different competitions, which have allowed me to know many places. Beyond that for me the most important thing is football, getting to know cities has been a very good life experience.