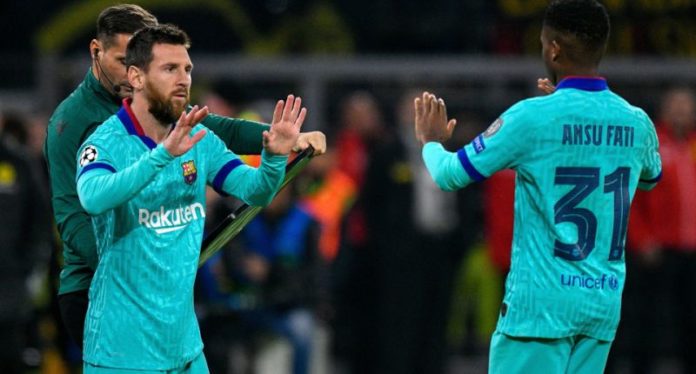 Messi and Ansu Fati with Barcelona. Ansu Fati had not played for a month. 35 days without putting on Barcelona’s shirt after his meteoric eruption that had taken him from the ground to the top in less than two months. And that for a 16 year old boy is too reciprocating.

That’s why his classmates knew that Fati needs everyone’s love and support. In this way with Messi in the lead, they looked for the young culé to involve him in the game. Messi combined with Fati six times, but he was not alone.

The pre Praetorian guard of Leo ’, those players he takes with most, also looked hard for Fati. Jordi Alba gave him 13 balls, it is true that he played in his band, but it is still significant. De Jong, the true driver of this Barcelona combined nine times while Suarez and Busquets assisted him twice.

Significant was the image of Ansu Fati falling in the Valladolid area and before the approach of Joaquín or Porro to recriminate what they understood as a giggle, Alba appeared as lightning and then Suarez to defend the ‘child’.

Griezmann, on the other end
But if through the game we can understand that Fati’s support is total in the locker room, more so because of the heavy weights, the truth is that Griezmann is at the other end. 27 minutes enjoyed the French in the match against Valladolid but just received a pass from Messi, another from Busquets but none from Suarez. Significant?