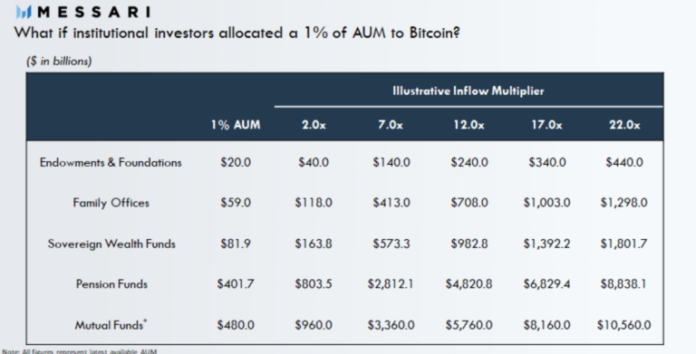 Ryan Watkins, a crypto researcher, thinks that the price of Bitcoin could go up to $ 50,000. But this requires more institutional investors to enter the market.

Paul Tudor Jones, one of the most famous investors in the world, announced that he started investing in crypto money a few weeks ago. Jones’ investing in Bitcoin has had a huge impact in the financial world. Although Jones doesn’t explain where he got these Bitcoins or exactly how many Bitcoins he got, he said that he “transferred 1 percent of his fortune to Bitcoin”.

One of the Messari researchers, Ryan Watkins, was influenced by this statement by Jones and did a new research. In this research, Watkins said, “What happens if institutional investors transfer 1% of their money to Bitcoin?” He tried to find the answer to the question.

The increase in the number of institutional investors in the crypto money world is generally seen as a positive development. The reason for this is that these investors bring more capital to the market and thus increase the Bitcoin price. According to Watkins’s research, if these investors transfer only 1 percent of their money to Bitcoin, we can see that the BTC price is up to $ 50,000. In other words, this allows Bitcoin’s market value to exceed $ 1 trillion.

According to Watkins’ research, if the number of institutional investors investing in Bitcoin in the USA increases, BTC price will start to increase rapidly. Because according to the data compiled by him;

According to this research published by Messari, if these institutional investors transfer 1 percent of these assets under their control to Bitcoin, the price of Bitcoin will be tens of thousands of dollars.