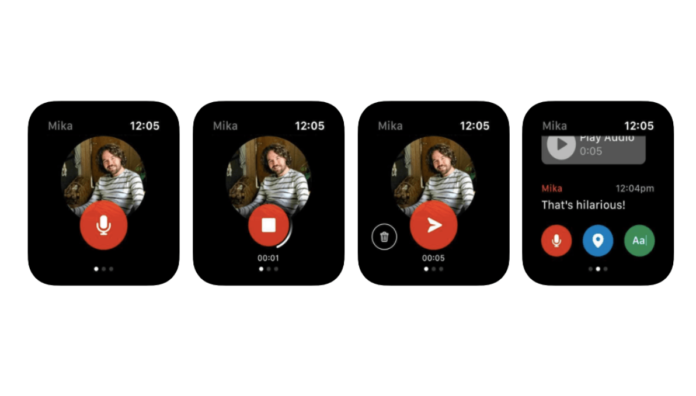 Facebook has launched a new app called Kit, which allows you to text messages with your close friends using your Apple Watch.

Facebook has launched a new app called Kit, which allows you to text messages with your close friends using your Apple Watch. Let us remind you that the expansion of the kit is “Keep in Touch”, that is, “stay in touch”. The kit works directly integrated with Facebook’s messaging application Messenger.

According to Kit’s description on the App Store, you first scan a QR code using your watch or connect to the app by entering an access code at fb.com/devices. Then you start to communicate with that person by choosing the friend you want via Messenger. The app allows you to send various messages with a single tap, including voice recordings, emoji, location sharing, doodles and even dictation input.

In fact, we can say that the use of the Kit is similar to using iMessage on Apple Watch. However, these messages are sent via Facebook’s Messenger service instead of SMS or iMessage. The new app also allows you to receive notifications, respond, and read your person’s messages to you.

The idea behind the app is to ensure that users stay connected without having to pick up their phone. Because it is quite difficult to keep in touch with the messaging method on Apple Watch. However, Facebook aims to avoid this problem with its new product. Facebook Messenger is already available on Apple Watch, but Kit focuses more on close contacts. It aims to keep you in touch with people like your close friends, family members. This reveals a different user interface and experience than Apple Messenger on Apple Watch. With the kit you need to navigate on a small screen to read and reply to your messages.

Since the app was created for Apple Watch, it is only available in the App Store, Android users cannot access the Kit. Apple Watch owners can download the Kit from the App Store.

20 curiosities of BTS that will make you admire them much...

Cloudflare Abandoned Intel: It Will Use AMD Processors On New Servers