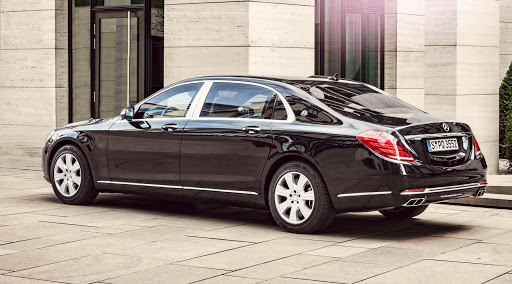 It may look ordinary from the outside, but this tool is both very powerful and very intelligent. It has protection systems specially developed for all unfavorable scenarios and autonomous intelligence to operate these systems. Let’s take a closer look at the price and highlights of the Mercedes S600 Guard.

Those who know know; Already, Mercedes is developing an engine system that will take itself one step further in every new model of the S series. The latest model of the S series, the Mercedes S600 Guard, has a 6.0-liter 523bhp V12 twin-turbo engine. The torque produced by the engine is 612lb ft. It seems impossible to carry a vehicle with such powerful features anyway with a lower engine power.

Tires that keep on their way even if it bursts:

Tires, which are the sensitive point of armored vehicles, have undergone a special development process that has not been overlooked in the Mercedes S600 Guard model. Michelin branded tires are not only thicker than any tire we know of, they also have steel rings. Thanks to the Proceed On Function run-flat technology, the vehicle can continue on its way even if the tires break. No known bullet can easily damage these tires.

Of course, Mercedes S600 Guard vehicles are designed for the use of important people, not for daily use, and therefore all possible attack possibilities are considered. During any poison gas attack, the vehicle shuts down completely, but there is still a special tank in the luggage compartment that will pump clean air into the vehicle in case of gas ingress. One of the equipment of the vehicle is a gun safe, in which weapons that may be required for security guards will be stored.

The thickest car windows ever made:

Even normal vehicle windows have a special structure against the possibility of an accident, and the Mercedes S series has double glazing. The Mercedes S600 Guard is several times thicker than even this double-layer special glass. Such that, since the power of the mechanism used in standard glasses is not sufficient for these glasses, there is a special hydraulic system in each glass. The windows cannot be broken easily with any known bullet and when closed, it prevents any gas from leaking into it.

Armored vehicle floors were also ignored for many years and were not sufficiently reinforced. In the Mercedes S600 Guard model, you can see that a special effort is spent for floor protection. The floor section of the vehicle has a stronger structure than body protection. Thus, the vehicle can continue on its way smoothly, shaking slightly even in the event of a bomb explosion underneath.

Of course, the indispensable point of such a vehicle is the body, namely the body protection. The Mercedes S600 Guard model is reinforced with a special steel placed between the structure and the outer cladding. It has a structure that does not even splinter in or out during an attack. It can withstand the serial shot of the M60 machine gun using 7.62mm bullets or even 51mm bullets.

The entire structure of the vehicle has been inspected by the German Federal Criminal Investigation Agency. At the end of the inspection, the vehicle received VR10 certificate and exceeded the ERV 2010 rating. This means that the windows are resistant to all types of bullets and the vehicle even to rocket-propelled grenades. So we can call it a more stylish version of the tank.

Holes that automatically close at the time of attack:

The person using this vehicle will not be under constant attack, so there is no reinforced full body protection at the so-called vents of the vehicle, such as the gas tank. But there is better. The vehicle is equipped with a special technology that closes all the holes in the vehicle when it receives any impact. If we say that the material covering the holes and the material used in Boeing AH-64 Apache tank attack helicopters are the same, you can better understand what kind of protection we are talking about.

We have said that the vehicle continues on its way even if its tires are torn, thanks to the On Function run-flat technology. In addition, it also has heated windows, fire extinguishing system and blackout curtains. Along with its seven-speed automatic structure, semi-autonomous driving feature is one of the prominent technical features of the vehicle. In addition, all the features mentioned in the headings above are realized with the autonomous structure of the vehicle. In other words, as soon as the vehicle realizes that it is under attack, it activates all protection procedures.

Just like the purchase of the new authority vehicle Mercedes S600 Guard model. The selling price of the vehicle is 474.950 Euros.

We talked about the price of the Mercedes S600 Guard model and its advanced features. You can share your thoughts on this powerful and powerful tool in the comments.