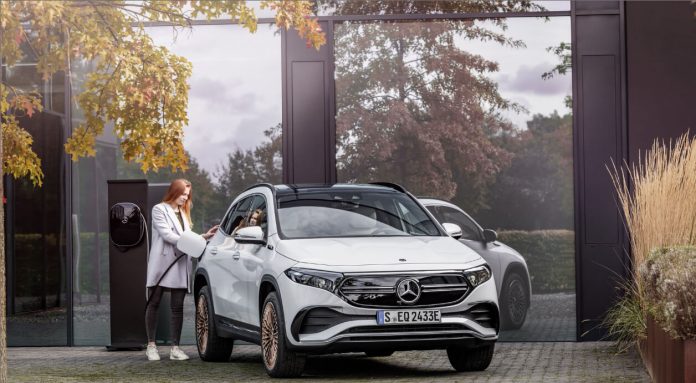 Mercedes-Benz introduced the 2021 model EQA. The car, the most affordable electric model of the German automaker, stands out as the brand’s smallest EV to date.

Similar to Mercedes’ GLA, the new EQA car features an electric motor with 190 PS and 375 Nm torque. In addition, the new EQA is powered by a 66.5 kWh lithium-ion battery.

Mercedes-Benz has not yet completed the WLTP test cycle of the EQA 250. For this reason, it is stated that the new EV has an estimated driving range of 426 km on a full charge.

As expected, the Mercedes EQA has a black paneled “grille”. The new electric model features revamped full LED headlights and taillights combined with an LED strip.

The new EQA shares the same body as the GLA, with new LED taillights and bumper. The new EV also features many blue scattered details and light-alloy wheel designs as in the other EQ range.

When we look at the interior design of the new electric car, it shares the same display layout with its ICE-supported sibling. However, the new EQA has trim elements and lighting effects.

The EQA basically comes with a 7-inch screen, with two optional 10.25-inch screens. In addition, the area in front of the passenger has a “spiral-looking” decoration that is backlit with the help of fiber optics.

Featuring an advanced infotainment system and more, the new Mercedes EQA comes with an 11 kW internal charger as standard. It is also stated that the New EQA can be charged between 10 and 80 percent in 30 minutes of charging.