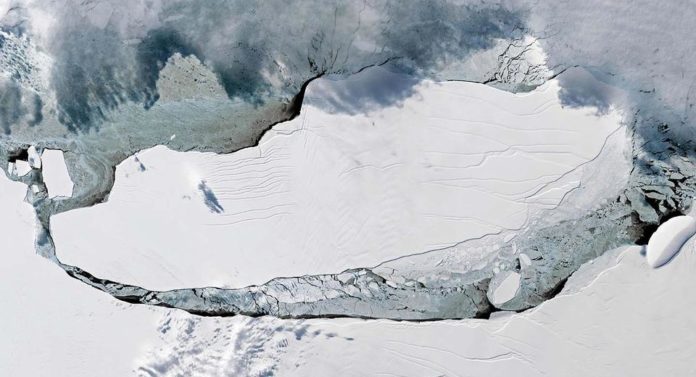 A new study highlighting the risks associated with melting glaciers revealed that the global sea level rose about eight meters, as the Eurasian ice sheet melted about 14,000 years ago.

The world, 4.6 billion years old, experienced five major ice ages during this time. The last of these began about 33,000 years ago, when large ice sheets covered most of the Northern Hemisphere. Spreading over much of Scandinavia at that time, the Eurasian ice sheet contained about three times the amount of frozen water found in today’s Greenland ice sheet.

A new study published in Nature Geoscience on Monday showed that as a result of rapid regional warming, this huge ice sheet melted over a period of only 500 years. The team, who made various investigations in the Norwegian Sea, discovered that the collapse in the ice sheet contributed to an event known as Meltwater 1A, a period when global sea levels rose about 25 meters 13,500-14,700 years ago.

The Eurasian ice sheet melted over a period of only 500 years
The author of the study, Jo Brendryen, from the University of Bergen, Norway, said that the melting of the Eurasian ice sheet coincided with wide regional temperature fluctuations. Stating that the samples on the Greenland ice sheet showed that the atmosphere above Greenland warmed up to 14 degrees within a few decades, Brendryen said, “We think this temperature change is the main driving force of the ice sheet collapse.”

As the world warms up everywhere as a reflection of global climate change, parts of the world, such as poles, are warming much faster than others. While the carbon dioxide (CO2) concentration in the atmosphere that caused the planet’s warming is now more than 415 ppm, then this rate was around 240 CO2 per 1 million particles.

Concerned that melting in glaciers will continue despite the CO2 concentration in the atmosphere decreasing
The Greenland ice sheet, which contains frozen water that can raise global sea levels by more than six meters, is currently melting at record speed. Losing more than 560 billion tons of ice in 2019 alone, Greenland melts six times faster than in the 1990s.

The new study revealed that the melting of the entire Eurasian ice sheet over several centuries raised the global sea level by more than four centimeters per year (4.5 to 7.9 meters in total). As the global temperatures increase, the ice sheets melting or crumbling drag the planet to the edge of the cliff. Of course for humanity …

Many researchers are afraid that ice sheets in Greenland and Western Antarctica will continue to melt despite the reduced CO2 concentration in the atmosphere. “Our research supports this idea because the sea-based regions of the Eurasian ice sheet disappeared suddenly and did not return,” Brendryen said.

The Universe May Not Be ‘Stagnant’ as Thought