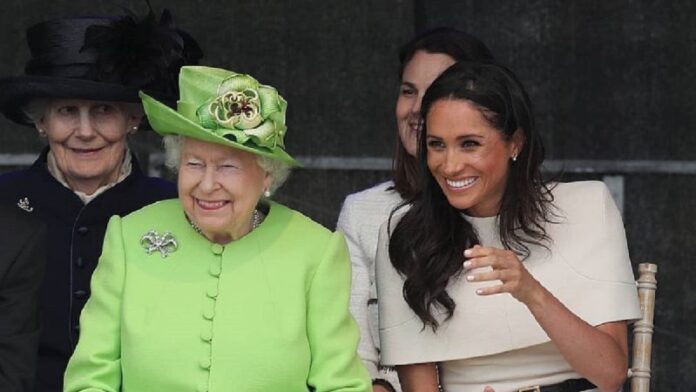 It was 2016 and Meghan Markle had just met Prince Harry. After some – few – casual encounters, the young people decide to take a trip to Botswana, the place that would change the course of their lives forever without knowing it. According to those close to the marriage, their love story began there and in that special place they fell in love. This is how the former actress wanted to remember her wedding anniversary: ​​she perfectly copied one of the magical nights in Botswana.

Both the protagonist of “A true love” and her husband escaped to African lands, in search of enjoying a few days away from the press, there their love story really began to be written. In this way, Archie’s mother used the Frogmore camp – while they still lived in the UK – to put together a large tent and sleeping bags to spend the night under the stars. Like that evening in Africa, the marriage celebrated their spiritual union and the great love they have.

Meghan Markle wanted to prepare something very special for Prince Harry and she did so. That night will remain in the thoughts of the Dukes of Sussex forever, as well as many special moments in his life such as the birth of his son and the resignation of the British Throne. The friends of the royal couple affirm that Botswana is the favorite place of Prince William’s brother and whenever he can he escapes to spend a few days in that desert paradise.

Meghan Markle Thought Royal Courtiers Were Planning To Harm Her Reputation After their royal farewell tour in the United Kingdom, Meghan Markle and Prince Harry shifted to Canada and then moved to Los Angeles in mid-March, taking the public by surprise. If a report from the Sunday Times Magazine is anything to go by, the couple’s friends were already aware of their plan to return to Meghan’s hometown. One of their friends told Vanity Fair correspondent Katie Nicholl that Canada was never going to be their home. The big plan, at least for Meghan was returning to Los Angeles. Soon after tieing the wedding knot, Harry and Meghan began looking for a house in California, a source told Nicholl. Meghan was always bent on spending a major portion of her time in her home country, but it wasn’t until Mar. 14 of this year the couple confirmed it as they left Vancouver Island in a secret operation in actor Tyler Perry’s private jet. Meghan and Harry took full advantage of the privacy until they could. Once they reached in L.A., Meghan reportedly took her husband for a drive around her hometown, showing him the house she was raised and even her preschool. This was just a couple of days before the paparazzi discovered where the couple was holed up. Visit www.wittyscoop.com to continue reading #meghanmarkle #meghanmarklestyle #meghanmarklefashion #meghanmarklefans #meghanmarkleedit #PrinceHarry #PrinceHarryOfWales #princeharrywindsor #PrinceHarrywhereyouat #princeharryandmeghan #princeharryofwales #princeharryandmeghanmarkle #princeharrymeghanmarkle #royalfamily #royalfamilydancecrew #royalfamilynews #royalfamilybhutan #Royalfamilymunny #RoyalFamilyTour #royalfamilydogs #RoyalFamilyEmpire #royalfamilyofdubai #royalfamilyracing

The Duchess of Sussex is a fan of gifts with strong symbolic value and likes to prepare gifts with her own hands. That day in the Frogmore patio he cooked dinner, prepared the sleeping bags and set everything up to make it perfect. Last week, for his second wedding anniversary and according to tradition, he gave her a cotton object, which celebrates the freedom and lightness with which the first years of marriage pass.

A Detail That Bears The Memory of Heath Ledger Has Been...