Home Celebrity Meghan Markle: her green ring is a hit! 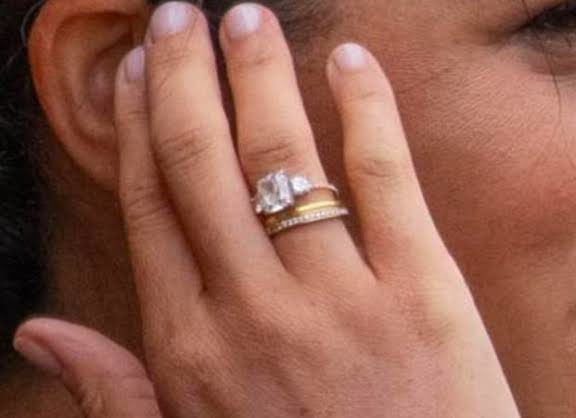 Meghan Markle has still made the buzz! The reason ? The young woman was wearing a green ring when she met Prince Harry for the first time. The jewel would have sold more than 20,000 copies.

It’s no secret, Meghan Markle loves fashion. At the beginning of her career as an actress, the mother has always opted for the most trendy outfits. And she continues! Since his union with Prince Harry, the style of Archie’s mom is analyzed through the press and on the Web. According to the rankings of Lyst Index, the Duchess of Sussex is also in the top 10 most influential personalities in fashion! The class.

Even pregnant with little Archie, Meghan Markle had not forgotten to have style! The young woman has also alternated different outfits brilliantly. But his looks are sometimes pinned by the press. Indeed, compared to his sister Kate Middleton, Prince Harry’s wife would not pay attention to his expenses. While Meghan often opts for luxury brands, she also chooses affordable pieces.

MEGHAN MARKLE MAKES THE BUZZ WITH AN ECOLO RING!
For more than two years, Meghan Markle has been living a love affair with Prince Harry. But before meeting for the first time the brother of Prince William, the young woman has bet on an ultra chic outfit! But Archie’s mom has also opted for a jewel that is far from classic. On her first date with Prince Harry, Meghan had worn a pretty green gold ring!

It is also a model of the brand New York Catbird she had unveiled on his blog The Tig. The jewel is worth 44 dollars, or 40 euros! Unsurprisingly, the seller saw his sales boost. Indeed, more than 20,000 copies would have sold thanks to Meghan Markle! Just that. A nice publicity for the brand!

Billie Eilish nostalgic for his first big concert in Auckland!