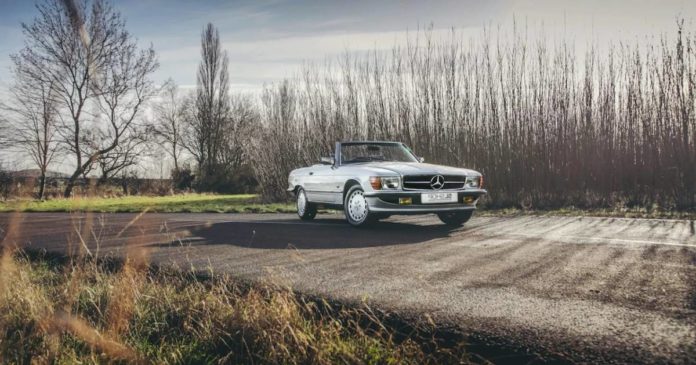 We have witnessed many classic cars that have been electrified recently. Now Mercedes Benz SL R107 also participated in this train. A company in the UK has modernized this iconic car that marked the 70s and 80s to be fully electric.

The automotive world has been experiencing a major transformation in recent years. Giant brands of the industry such as Mercedes, Volkswagen, BMW and Volvo started to put the electrification at the center of today and tomorrow. Some of these companies even aim to produce only electric cars in the coming years.

In addition to the new models, some cult models that have marked the history of the automobile also get their share from this transformation. We recently shared with you that German manufacturer Volkswagen transformed the iconic bus model T1 Samba of the 1960s into a fully electric concept vehicle. Now, Mercedes Benz SL R107, one of the unforgettable vehicles of the 70s and 80s, participated in this furry.

The British company SL Shop, which specializes in modifying Mercedes Benz models, has transformed this iconic model into a fully electric vehicle. The car, the world’s first and only electric classic Mercedes Benz SL R107, said goodbye to the 3.5-liter V8 engine under its front hood as a result of this transformation. Now powered by an electric twin engine, the SL R107 offers a driving range of 240 kilometers on a single charge.

The original SL R107 increased from 0 to 100 kilometers in 9.9 seconds. We don’t know the numbers in the electric version, but it’s probably much faster than the gasoline model. The original SL R107, produced between 1971 and 1989, is known as the second series that Mercedes kept the longest on the production line after the G-Class off-roader.

Quasar emits radio waves from the ends of the Universe