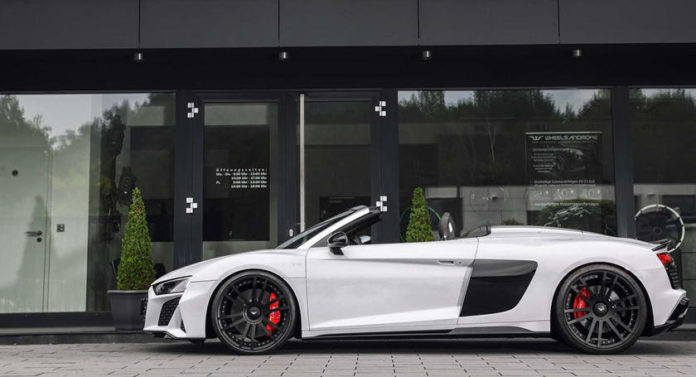 Germany-based Wheelsandmore, known for its performance enhancements to cars, removed the new special Audi R8 V10 Spyder from its garage. The vehicle, which is almost twice as strong as the R8 V10 Performance model, accelerates 0-100 kilometers in just 2.7 seconds.

Wheelsandmore has been offering various enhancements for the current Audi R8 since it was launched in 2015, including ECU software optimization and a wing exhaust system that increases its power output to about 800 horsepower. The German company has now introduced the new Audi R8 V10 Spyder, which promises tremendous performance.

With the new upgrade package called Apocalypticar, many improvements have been applied to the vehicle, including an asymmetrically powered pair of turbochargers, new water and charge air coolers, and engine control software. Wheelsandmore, which turned the Audi R8 into a 1,035 horsepower monster, increased its torque to 737 lb-ft.

For comparison; The standard Audi R8 V10 Spyder Performance offers 611 horsepower and 477 lb-ft of torque. Thanks to the modification applied by Wheelsandmore, the vehicle accelerates from 0 to 100 kilometers per hour in just 2.7 seconds.

In addition, the maximum speed, which was 328 kilometers in the standard version, was increased to 349 kilometers. Other modifications include adjustable lowering springs, coilover suspension, custom matt black 20-inch wheels at the front and 21-inch wheels wrapped in Continental tires at the rear.

Not surprisingly, these upgrades are not cheap at all. The current price of the Audi R8 V10 Spyder Performance is around $ 208,000. The price of this special Audi R8, which came out of Wheelsandmore, is over $ 300,000.