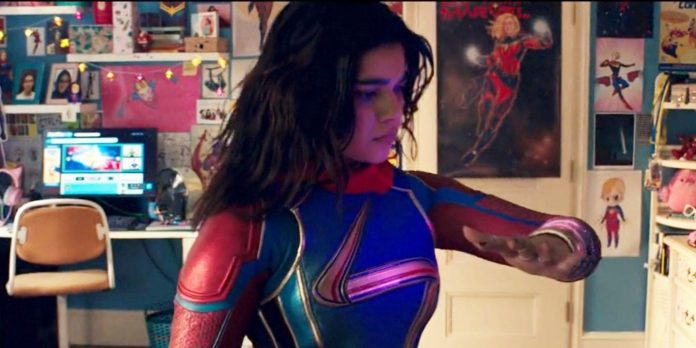 MCU fans are reacting to the major surprise cameo in the Ms. Marvel finale, bringing season 1 full circle for Kamala Khan as she completed her heroic debut. One of the latest Marvel heroes to make their way from the pages of comics to the screen this year was Kamala Khan, a.k.a Ms. Marvel. Played by Iman Vellani, Ms. Marvel follows the story of a young Pakistani teenager from New Jersey who has been a massive Captain Marvel fan her whole life. Hoping to be a hero herself, Kamala’s wish comes true after discovering that she has powers of her own.

This week, Ms. Marvel finished season 1 on Disney+ as Kamala’s origin story came full circle, officially taking on the heroic moniker and becoming New Jersey’s new protector. Kamala’s journey is far from over though as Vellani is set to reprise the role in The Marvels. The Captain Marvel sequel will see Vellani’s Ms. Marvel join forces with Brie Larson’s Carol Danvers and Teyonah Parris’ Monica Rambeau. While The Marvels won’t hit theaters until 2023, the Ms. Marvel finale gave fans an early taste of the highly anticipated MCU sequel.

Like most finales for Disney+’s MCU shows, episode 6 of Ms. Marvel did not disappoint as Larson made a surprise cameo appearance as Captain Marvel. In true Marvel fashion, the Ms. Marvel post-credit scene sees Kamala reacting to her bangle suddenly glowing for a mysterious reason. All of a sudden, Kamala is thrown into the closet and transported away, with Captain Marvel suddenly coming out, finding herself in Kamala’s bedroom. It wouldn’t be a Marvel finale without MCU fans having all sorts of reactions on social media, and the Captain Marvel cameo in the Ms. Marvel finale was no exception, as viewers had plenty to say.

#MsMarvel – Finale – Spoilers
.
.
.
.
.
.
Carol Freaking Denvers A.K.A #CaptainMarvel in the house 😭 #TheMarvels, This is So Wholesome.. pic.twitter.com/QX0c8QlUhv

SHUT THE FUCK UP SHE JUST CAME OUT A CLOSET IM YELLINGDKDKKDJDJ pic.twitter.com/m37RmLhiBJ

NO BUT I JUST MISSED CAROL DANVERS SO MUCH???? 🥹 pic.twitter.com/u7NASif4Tm

carol danvers aka captain marvel you will always be my favorite person in the world <3 #MsMarvel pic.twitter.com/b6MvmvZKC3

#MsMarvel OH MY GOD CAROL DANVERS I CANNOT BELIEVE IT MY QUEENIE pic.twitter.com/wQ3FvYhJ6U

While Marvel Studios does a lot of things well, one of the things they always come through with is those cameos and post-credit scenes. Even though it was always a fact that Kamala would be sharing the screen with Carol in The Marvels, fans were hoping to see Captain Marvel and Ms. Marvel together in some capacity in the Disney+ series. Although, to be technical, even if it was in the same scene, Carol and Kamala didn’t actually meet in the Ms. Marvel finale. When Carol suddenly showed up in her bedroom, Kamala supposedly went wherever Captain Marvel was before the bangle went off. Although some believe that Ms. Marvel shape-shifted into Captain Marvel, that’s unlikely to be the case as it seemed like Larson’s character was more freaked out about where she was rather than what she was looking like now.

Nevertheless, what happened in the Ms. Marvel post-credit scene, it was still phenomenal to get a Captain Marvel cameo. Even though The Marvels is coming out next year, it won’t be until late July 2023 as there are still three other MCU films that will be coming out first. Based on the social media reactions by MCU fans, there is even more excitement out there to see Ms. Marvel come into the larger MCU next year and for Kamala’s team-up with Carol and Monica. With San Diego Comic-Con taking place next week, and Marvel Studios having a panel at Hall H, perhaps Ms. Marvel fans will get a first look at The Marvels, including some answers about where Kamala went when Carol took her place.

The director of Prey told what was wrong in previous films...