Home Entertainment MCU: 12 things we hope to learn more about at Comic-Con 2022 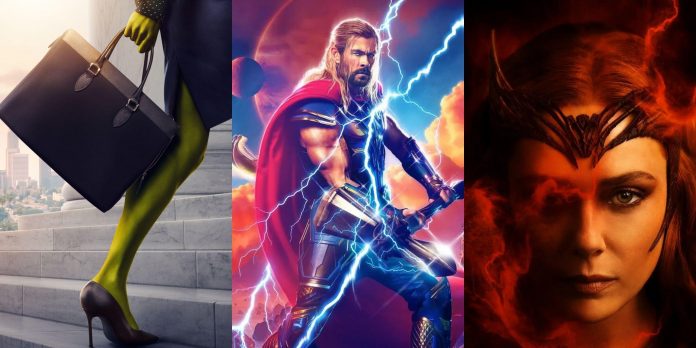 Audiences are in for fun and wild rides with the latest inclusions from the Marvel Cinematic Universe, Ms. Marvel and Thor: Love and Thunder. There are many exciting projects on the horizon and even more coming out of sight. Before any of those arrive, however, fans will be getting the major download of what’s to come at Comic-Con in San Diego, July 21st-24th.

Marvel is returning to the event after two years away, and it’s already looking like they will be covering a lot. On top of the many announcements and reveals they’ve made recently, here are the major projects and concepts fans can expect Marvel to showcase during their time at Comic-Con.

Over the pandemic, Marvel has made their major announcements largely at the D23 Summits, but the last time they were at Comic-Con they established a clear roadmap for the future. Of course, those plans were drastically affected by the pandemic and nothing was released in 2020. Thor: Love and Thunder was the last thing on that roadmap, so now they are at an incredibly important crossroads.

RELATED: 7 Movies Or TV Shows Jane Foster’s Mighty Thor Could Show Up In Next

Fans should expect to learn of the upcoming release schedule accommodating the film and growing list of Disney+ shows. Clearly defining the future is something that fans have been increasingly eager for.

Shortly following Comic-Con, the next endeavor in the MCU is I Am Groot, a series of animated shorts following Baby Groot. This isn’t the most consequential project coming up, but it should still be quite fun. Vin Deisel is back voicing Baby Groot as he grows up and traverses the galaxy. At this point, it is unknown if any of his teammates or related characters will be featured.

There is plenty of mystery around Groot in the MCU, so I Am Groot might still answer questions about his origins. Though it likely won’t get as much attention as other upcoming series at Comic-Con, it does feel like a safe bet for there to be some new information or even a first-look provided. I Am Groot arrives on Disney+ on August 10th.

Premiering a week after I Am Groot is She-Hulk: Attorney At Law, starring Tatiana Maslany as Jennifer Walters, Bruce Banner’s cousin who becomes the hero She-Hulk after receiving his gamma-affected blood from a transfusion. The first trailer was released a little while back and it definitely grabbed viewers’ attention, though not for the reasons they probably intended.

The CGI for She-Hulk was ripped apart and it left many people nervous about the show. However, they could give another look at the updated effects at Comic-Con – along with a real first look at Jameela Jamil as the show’s antagonist, Titania – to better prepare audiences. The show has plenty of potential still, and many fans have developed some great theories for what could happen.

Now that Thor: Love and Thunder is in theaters, the MCU project with the stranglehold over fans’ curiosity is Black Panther: Wakanda Forever. Thankfully, Marvel’s already announced that this film will receive plenty of attention at Comic-Con. Black Panther holds a very special place in many peoples’ hearts, so they are rightfully anxious regarding the sequel.

RELATED: 9 Reddit Fan Theories For How Hulu-Marvel Characters Can Return To The MCU

Filming was riddled with delays and complications, but the biggest concern surrounding the film is how it will address the tragic passing of Chadwick Boseman. Marvel announced that they will not be recasting T’Challa, which is an extremely divisive topic. Along with this, fans could expect them to introduce Tenoch Huerta as Namor at the event since his casting and costume were leaked recently. Black Panther: Wakanda Forever arrives in theaters on November 11th.

Phase Four has been a time for thematic and structural exploration for the MCU. Before it was only movies. There were several related TV shows across ABC, Netflix, and Hulu, but they were never integrated significantly into the main canon. On top of the Disney+ shows, there are two specials in development, and there is very little known about them.

The first is a Halloween Special directed by Michael Giacchino, and so far only Gael García Bernal and Laura Donnelly’s castings have been announced. There is also a Guardians of the Galaxy Holiday Special slated to premiere by the end of the year to discuss as well. James Gunn said some important Marvel characters will be introduced in it, so maybe they will be revealed.

Following She-Hulk: Attorney At Law, supposedly the next Disney+ show is going to be Secret Invasion. The show will finally feature Samuel L. Jackson in the leading role, along with Ben Mendelsohn, Cobie Smulders, Martin Freeman, and even Don Cheadle. They will also be joined by many other actors including Emilia Clarke, Olivia Coleman, Kingsley Ben-Adir, Christopher McDonald, Carmen Ejogo, and Killian Scott.

None of their roles have been disclosed, so theories abound over who each could be playing. Along with those casting decisions, it would be safe to say that they will announce a release date for Secret Invasion, likely setting it to start sometime in November. Interestingly, Kevin Feige’s already said that Secret Invasion will not be the major crossover arc like it was in the comics, but it could still have incredible implications for the rest of the MCU.

Of course, along with Black Panther: Wakanda Forever, the project fans are clamoring for more information about it Fantastic Four. John Krasinski was featured briefly in Doctor Strange in the Multiverse of Madness as Earth-838’s Reed Richards. At first, many people took that to mean he will play the role throughout the rest of the MCU, but rumors and speculation are saying otherwise.

RELATED: 10 Reddit Fan Theories For How & When The Fantastic Four Could Be Introduced Into The MCU

In April, Jon Watts announced that he is stepping down as director of Fantastic Four. With the casting, director choice, and release date still a mystery, there is plenty of information to reveal, and Comic-Con is the perfect venue for it.

While Secret Invasion will be quite insular, perhaps Armor Wars could step in as the crossover Disney+ series. The show will feature Don Cheadle as War Machine as he hunts down Stark Tech which has fallen into the wrong hands. So far only Walton Goggins has been announced to be joining him, reprising his role as Sonny Birch from Ant-Man and the Wasp. However, there are many other characters like Justin Hammer who could return, and even more new characters who could be introduced, like Crimson Dynamo.

As shown currently in Ms. Marvel, Damage Control has weaponized the Stark drones even more after they acquired them following Spider-Man: Far From Home. That could draw them into Armor Wars. It would be unsurprising to learn that Dominique Thorne could appear as Ironheart, following her introduction in Black Panther: Wakanda Forever and her own series Ironheart. All this being said, Armor Wars should get some special focus at Comic-Con.

Marvel has also announced that there will be information provided specifically regarding the upcoming animated series they are developing. Some are part of the MCU like What If…? and its own spinoff Marvel Zombies.

However, what is really drawing attention is X-Men ’97. This series is not part of the MCU’s main continuity, though maybe it could be defined as taking place in an alternate universe. It is a revival and sequel to the intensely popular X-Men: The Animated Series, and all the original cast is returning. A first look at X-Men ’97 has been guaranteed at Comic-Con.

Most of the Marvel Disney+ series have been presented and programmed as mini-series, with the exception of Loki. Regarding WandaVision and The Falcon and the Winter Soldier, they were confirmed to be one-and-done projects that lead into films. However, that has not been formally defined for other shows, and it needs to be.

RELATED: 10 Reddit Fan Theories For How Netflix-Marvel Characters Could Return To The MCU

It would make sense for Hawkeye, Moon Knight, and even Ms. Marvel to return for more seasons. Otherwise, they need to clarify when and how next fans will see these characters again. On top of any talk regarding new seasons for these shows, fans could also hope to learn more about Daredevil season 4 and/or how other Marvel Television characters might be reintegrated into the MCU.

Even ahead of Comic-Con, Marvel’s been busy announcing new projects, such as a Wonder Man Disney+ series and a Thunderbolts film. Perhaps they will announce who will be playing Wonder Man – many are hoping for Nathan Fillion – and who else could be appearing in the series. Overall, though the existing slate is already massive, Marvel could very announce many new projects.

This could include relatively simple things like title announcements for Shang-Chi 2, Deadpool 3, and/or Captain America 4, which recently got its director. Alternatively, they could confirm any unannounced projects highly desired by fans, including solo projects for the likes of Scarlet Witch, Wong, Valkyrie, Sif, and/or Okoye.

Along with the Fantastic Four, the hot topic that MCU fans want to know about is when and how mutants, and thus the X-Men, will be introduced. This was promised briefly years ago, and ever since fans have inspected every single project as being the potential catalyst for their arrival. It started with WandaVision, and it will continue until they’re officially announced.

Even Ms. Marvel is involved in some theories saying that the Damage Control drones are the first step toward the Sentinel program – interesting since Ms. Marvel is an inhuman, not a mutant in the comics. Information regarding an X-Men film and/or Disney+ series would certainly steal all attention at Comic-Con, so here’s to hoping fans won’t have to wait much longer to get some.

In what order to watch the films of the Lord of...