Home Entertainment MCU: 10 Movies that Could make Great Video games, according to Reddit 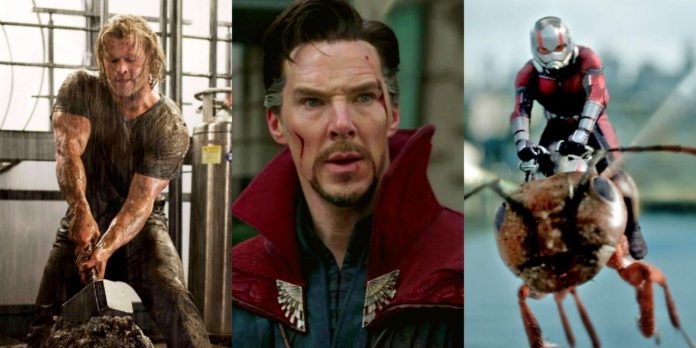 A lot of Marvel games have been released over the past few years, whether it’s Square Enix’s Marvel’s The Avengers or Insomniac’s Marvel’s Spider-Man, and it’s now rumored that EA is developing a Black Panther game. The game will unlikely be the same depiction as the Marvel Cinematic Universe’s Black Panther, as the licensing rights for Marvel characters are a lot different when it comes to video games.

It isn’t all under one house like how the MCU belongs to Marvel Studios. However, fans want nothing more than a game based on any one of the MCU movies, and Redditors have some interesting choices with some even more interesting pitches. Between a Valve-inspired Doctor Strange game and a Civil War role-playing game, there’s so much untapped video game potential when it comes to the MCU.

While Captain America: The First Avenger didn’t necessarily do anything particularly exciting when it comes to action, The Winter Solider elevated the Cap movies into espionage thrillers. And along with the switch-up of genres came exhilarating hand-to-hand combat sequences that gave John Wick and The Raid a run for their money.

Jezz212 thinks a game based on the 2014 movie could be incredible because of the potential combat and stealth systems. The Redditor posits, “I think that taking a cue from a stealth game like Splinter Cell would be great as well, the Lemurian Star scene in The Winter Soldier gave me serious Splinter Cell vibes.” Combining the combat of the Batman: Arkham games and the stealth of the Splinter Cell games would make for the most immersive Captain America gaming experience.

A Guardians of the Galaxy game already exists, and it was released just last year, but it’s completely unrelated to the MCU movie and doesn’t follow the same events. Gordut thinks the 2014 film could make for one of the most exciting sci-fi adventure games and that it should follow the same path as the best Star Wars games.

The Redditor claims, “Guardians of the Galaxy presents so many crazy game opportunities though. Look at all the Star Wars games. You could pretty much have any game like that set with the GOTG.” The game adaptation of the movie could follow the events of the film but with an open world map, where players can explore space at their leisure and do side-missions for the Collector and other weird side characters.

There’s such an abundance of Spider-Man games that people would expect it to be fatiguing for gamers, but that couldn’t be further from the truth. Free-roaming Spider-Man games have been released almost annually since 2002, and the most recent Marvel’s Spider-Man: Miles Morales was more popular than ever.

This Redditor believes that there should be even more, noting, “A Spider-Man game, tied in with the events of the MCU.” In fairness, Spider-Man: Homecoming has the greatest Spidey-suit ever, and kill mode would add yet another new dimension to Spider-Man games. And as Homecoming deviates from the Spider-Man formula by being a high-school comedy and Peter having an Avenger as a mentor, it’d be unique in the lineage of games about the web-slinger.

While Captain America: The Winter Soldier would make a great stealth game, Heath_Barr46 has their sights on the sequel getting adapted into a video game, and even pitches the perfect game developer too. The Redditor simply comments, “Captain America Civil War, by Blizzard.”

Blizzard has some big franchises in the catalog of developed games, including Warcraft and Diablo, and these MMOs and role-playing style of gaming would be the perfect type of gameplay for Civil War. The game could start with players choosing Team Cap or Team Iron Man, and they’d build their team from there, strategically choosing which abilities and powers each hero in their team uses for each fight.

Ever since she was introduced in Iron Man 2 in 2010, Black Widow has shown just how great a spy she is, and her fighting style is more intricate than even Captain America’s. However, it isn’t the combat that NorrisOBE thinks would make for a great video game, and they have a more interesting elevator pitch.  The Redditor claims, “I would love to see an open-world Black Widow game like Just Cause 2.”

There are a lot of similarities between the 2021 movie and the Just Cause series, as they both feature spectacular action sequences, whether grounded or in mid-air, and they’re both completely bombastic too. But the user’s idea deviates a little from the film, noting that the open world would be Wakanda, which would be even more exciting given that players could use Wakanda’s advanced technology too.

Just like Guardians of the Galaxy, Marvel’s Avengers already exists, but once again, it isn’t based on the MCU movie. Instead, it’s a huge online game that’s more focused on multiplayer gaming than anything else. Oreoghoul thinks a great game could be made based on the 2012 film, positing, “Get Rockstar Games or Bethesda to make an open-world Avengers game and it could be amazing.”

While it’s a great idea, it’s a huge pipe dream, especially when it comes to the Redditor’s choices for developers. Not only would it be nigh-impossible to create a huge open world with several playable characters that have completely different powers, but Rockstar and Bethesda are two of the biggest developers ever. Both companies are hard at work with their own properties, whether it’s Elder Scrolls or Grand Theft Auto, but it doesn’t hurt to dream.

If 2012’s The Avengers would make for a difficult game to develop, Infinity War would be impossible, but it’d also be incredible if anyone could pull it off. This user is the biggest advocate for the 2018 movie to get the video game treatment, and they seemingly have the whole game and its levels all mapped out.

The Redditor outlines the Children of Thanos as mini-boss fights, and they even make Thanos a playable character. It’d be difficult to adapt the movie, as it’s just one part of a two-part story that includes Endgame. But if the game was played out in a linear fashion, it’d be great to take part in Infinity War’s most amazing action sequences, whether it’s the Battle of Wakanda or the Guardians vs. the Avengers.

If any MCU movie has the most potential for an incredible video game, it’s Doctor Strange, and by extension, Doctor Strange in the Multiverse of Madness. The 2016 movie is full of weird effects and cool action scenes, and, as Blockinite notes, “If they handle spell-casting well and have a good story then it’d be amazing.”

One of the best game series of the 21st century is Valve’s Portal, and those portal mechanics could be used for a Doctor Strange game, which would be even better if that includes using portals to jump through universes. And as Multiverse of Madness is full of classic Sam Raimi horror tropes, a game based on the 2022 film could make for a great survival horror game too.

Ant-Man is the best family-friendly MCU movie, and that’s thanks to all the visual gags, which could be brilliantly adapted into playable action levels. Arcade-marvel wants nothing more than to see a game based on the MCU series, noting, “an Ant-Man game with changing size and an ant-controlling mechanism.”

While the games industry has been oversaturated with a countless amount of subpar free-roaming video games, Ant-Man would make a genuinely great open-world game. For starters, the Ant-Man movies are set in San Francisco, one of the most scenic cities in the U.S. And the game could let players tear up Lombard Street as Giant-Man riding a flatbed truck as a scooter, or flying around on Anthony.

This user wants to see an epic multi-world Thor video game. The Redditor wants to see, “Flight. Destructible environments. Maybe some gear progression in the side. Loki side stories. Nine freaking worlds to explore. Full use of game physics because Thor is strong like that.”

It isn’t clear which Thor movie the Redditor is referring to, but Thor: Ragnarok could make for an incredible Mortal Kombat-style fighting game. Given that gladiators fight for the Grandmaster’s entertainment in that huge arena, the whole game could let players select Korg, Thor, Loki, Hulk, the Grandmaster himself, or a slew of other characters to fight. That could even serve as a mini game to a much more sprawling adventure that follows Thor trying to return to Asgard and stop Hela.

I Never…: Series is Renewed for Season 3 on Netflix