Home Entertainment MCU: 10 Movies Fans Want to See in Phase 6, according to... 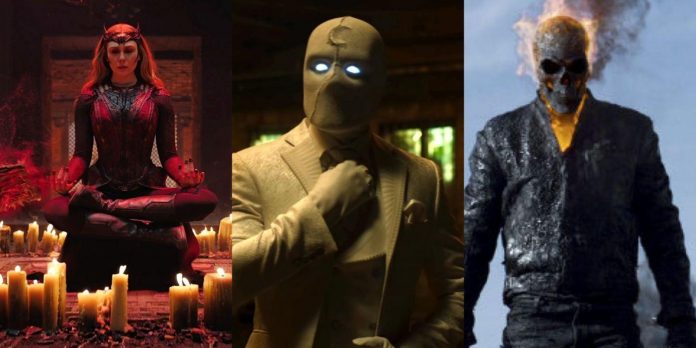 The 2022 San Diego Comic-Con has just wrapped, and Kevin Feige revealed the MCU Phase 6 timeline, which will start in November 2024 and end in November 2025. The timeline is made up of 11 releases, but only three of them (Fantastic 4, Avengers: The Kang Dynasty, Avengers: Secret Wars) have been announced. That leaves eight blank spots that will be made up of unannounced Disney+ series and movies.

While some of the blanks will obviously be previously announced titles like Armor Wars, Redditors have debated which movies they want to see in Phase 6 the most. Between a solo supervillain movie, A Daredevil/Deadpool/Spider-Man team-up release, and a J. Jonah Jameson-led mystery flick, users have gotten creative.

Redditor JavelinTF2 thinks there should be a Doom film sandwiched between the two Avengers movies. The Redditor posits, “Hoping one of the things between Kang Dynasty and Secret Wars is a Doom project.” WandaVision might have followed Wanda as she turned into a villain, and Loki has his own Disney+ series, but he has been redeemed several times over and is now more of an anti-hero. However, a solo Doom movie would mark the first time ever that Marvel Studios made a film where a straight-up villain is the main character.

DC has gone down this avenue with movies like Joker, but the MCU has stayed away from doing any such thing, and it’d be interesting to see how Marvel Studios approaches what would obviously be such a dark movie. It’s a risky movie, but it could have a huge payoff.

It came as a surprise that there was no word about Shang-Chi 2 at the Comic-Con Marvel panel, as it’s considered one of the best Phase 4 movies. So many fans want to hear about Shang-Chi 2, especially CruzAderjc, who wants it to be one of the unannounced Phase 6 movies.

The Redditor even has their own elevator pitch for the film, positing, “I want Shang-Chi 2 to be an MCU all-star tournament, Mortal Kombat style. Like we see just a bunch of random characters from the different projects going up against each other with Shang’s sister watching in the background.” As Xu runs a strange superhero fight club, there’s no doubt that a whole movie based on the club will be exciting. But as Mortal Kombat 2 has officially been confirmed, it isn’t exactly necessary.

Chloé Zhao’s Eternals is by far the least liked MCU project to date, as it’s the only one rated “rotten” on Rotten Tomatoes, and fans weren’t all that receptive to it either. However, the film still has its fans, one of which is Realitymatter, who wants nothing more than Eternals 2 to be one of the eight unannounced Phase 6 movies. The Redditor explains, “I get that it was a polarizing movie, but they did leave it on a massive cliffhanger that they have to resolve eventually. I really loved that movie and I hope the sequel is in phase 6.”

The movie ended on a literal giant cliffhanger, as Arishem appears over Earth that billions of people must have seen and that strangely hasn’t been brought up once. Even though the first film didn’t blow viewers away, Arishem’s imposing appearance has to have just as big of a payoff.

It has only been a couple of months since Doctor Strange in the Multiverse of Madness, and it wasn’t long before that when he prominently featured in Spider-Man: No Way Home. Nevertheless, Reddit user InterceptorLL8H wants to see the threequel. The Redditor comments, “Crossing my fingers for more Dr. Strange shenanigans.” Unfortunately, based on the fact that there were six years between Strange’s first outing and Multiverse of Madness, it’s unlikely that a third movie would be released in such quick succession.

There are so many other reasons that make it unlikely that the film will be a Phase 6 release too. Strange has seemingly assumed Tony Stark’s role as the cement that holds the MCU together, appearing in so many other heroes’ movies. And while Multiverse of Madness looked completely unique and its comedy horror was a refreshing change of pace, not every fan loved it, so it might not be that high up on Marvel’s to-do list.

The end of No Way Home was clearly teasing more Spidey movies with Tom Holland in the lead role, but it isn’t clear whether it’s part of Sony’s Spider-Man Universe or the MCU. But BenSolo_Cup wants to see the movie get announced as a Phase 6 movie at D23.

The Redditor wishes, “Man, I really hope they team up with Sony somehow and bring out Amy Pascal and Tom Holland to announce Spider-Man 4.” As the character still technically belongs to Sony, Marvel Studios isn’t allowed to announce anything Spider-Man-related, even if it is a part of the Marvel Cinematic Universe. But that doesn’t mean there can’t be a special guest or two at D23.

The fact that Moon Knight season 2 wasn’t announced is one of the biggest Comic-Con 2022 disappointments. The Disney+ series was completely unique and introduced one of the most interesting comic-book characters that had been sidelined for way too long. And it, unfortunately, looks like he has been sidelined once more.

But KinoTheMystic still has high hopes that a Moon Knight project is an unannounced Phase 6 release, but they have one demand. The Redditor adds, “As a movie, please. I want to see big-budget Moon Knight.” The material seems like it’s best suited to the movie format, especially given that it felt like something was missing from the series.

Where most of the projects that Redditors want to see announced for Phase 6 are based on some kind of rumor or previous announcement, Flippy-Doo conjures this amazing idea out of thin air. The Redditor pitches a J. Jonah Jameson movie “where he investigates strange things in the MCU… think of it like an MCU version of The X-Files.”

RELATED: 10 Marvel Actors Who Were Huge Fans Before They Were Cast

There is no better character to star in this type of movie, as the supernatural goings-on in the MCU could elicit some hilarious reactions from the grumpy Daily Bugle reporter. But, once again, the character belongs to Sony, so it has to be another partnership between the two studios.

Fans have been clamoring for a Ghost Rider movie for what feels like forever at this point. The character was even rumored to appear in Multiverse of Madness, but that obviously didn’t happen. However, dGb is still hopeful that they’ll see the character, and they want one of the unannounced Phase 6 projects to be Ghost Rider-related.

The Redditor impatiently notes, “I don’t care what he shows up in or which version of the character they use, I just want to see Ghost Rider, bros.” It’s hard to understand where Johnny Blaze would fit in when it comes to The Multiverse Saga, but if anyone can make it work, it’s Feige.

A good chunk of the Comic-Con panel was very much centered around Matt Murdock, as not only did the character show up in the new She-Hulk trailer, but Daredevil: Born Again was announced and will be 18 episodes long. With so much of Marvel’s attention given to the blind superhero, it’s a wonder what else the studio has in store for him.

Reddit user TheSchiller is seemingly trying to manifest their dream, as they want to see a Team Red movie. The Redditor posits, “Now that we have Daredevil back, and Deadpool, I would love to see a Red team-up with Spider-Man!” The unlikely trio would make for such an entertaining team-up movie, but they’ll most likely team up for one or two scenes in a much bigger release like Avengers: The Kang Dynasty.

While Wanda has been a part of the MCU for seven years now ever since Avengers: Age of Ultron, fans never saw her fully transform into the Scarlet Witch until Multiverse of Madness. The film portrayed her as one of the MCU’s most terrifying villains, and even though she died, Both-Perception-6525 wants to see her return.

The Redditor notes, “Fingers crossed for the Scarlet Witch solo film.” In fairness, nobody in the MCU ever stays dead, and her body was never actually shown on screen. Agatha: Coven of Chaos will be released in Phase 5, and the Scarlet Witch will likely appear in the Disney+ show in some capacity, and it’ll hopefully be a prologue to her own film.

A Look At The Most Promising, Crazy And Original Indie Projects