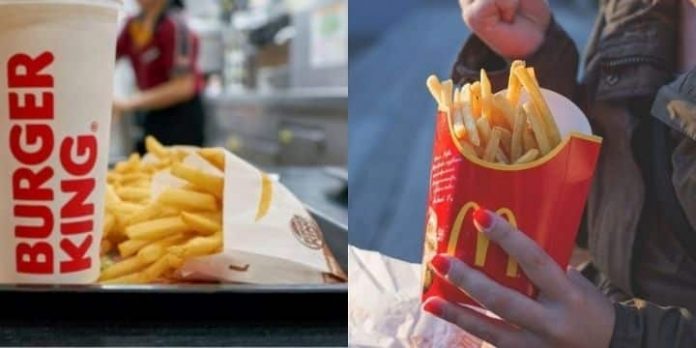 Who from McDonald’s or Burger King really has the best fries? A look back at the success of a dish that has become essential.

McDonald’s or Burger King, who really has the best fries? MCE TV looks back on the secret of their success.

Ah the fries! Thin, beautiful, crispy we like them with our burgers, our steaks or on their own to quench a snack.

But before we know who has the best fries between McDonald’s and Burger Kings, where do we get those little bites of happiness we love so much? Today our Belgian neighbors can be proud to dominate the French fries culture.

The reputation of Belgian fries is well established. But we must not confuse culture and origin. And there, the story gets complicated.

Opinions differ from country to country and we can’t go back in time to check it all out, so we’ll give you both versions.

According to the French, the fries were born on the oldest bridge in Paris, ironically called the Pont Neuf. Thus, the day after the Revolution of 1789, street vendors offered hash browns to passers-by.

This legend has therefore long been in vogue. But on the Belgian side, the fries would have emerged in Namur, in the south of the country.

Its inhabitants therefore used to fish in the Meuse and fry their fish. But in winter, when the river freezes, they would cut up potatoes in the shape of small fish to eat them.

The Americans seem to have chosen their camp. They say French Fries and not Belgian Fries… Case closed, the fries will therefore be French.

If today the fast food chain is so popular, it must be said that it also owes its success to its fries. Indeed, since the marketing of its very first products, McDonald’s has introduced fries into its menus.

In fact, before the 90s, the best fries in the world were those from McDonald’s! Eh yes. Why this date? Because in 1990, the fast-food restaurant with yellow arches decided to change the recipe for its French fries!

And this change will break the hearts of some fast food fans. We think of Malcolm Gladwell who will release a podcast entitled “McDonald’s Broke My Heart”.

See Also
McDonald's and Twitter want to be inclusive by 2025!

We are talking about a time that the under 30s cannot know. Back in the day, McDonald’s used to cook their fries in a mixture of beef tallow!

In fact, Ray Kroc, the one who proclaimed himself the founder of the chain, considered this preparation “a ritual to be followed religiously. »But despite his little baptism, his fries will not be blessed.

They will even be seen as the devil! Phil Sokolof, American Multi-Millionaire Businessman Converted to Fighting Cholesterol After Heart Attack, accuses McDonald’s of poisoning America!

And to understand how powerful man is, he will succeed in bending one of the biggest companies in the world, which ends up changing its recipe to offer a “healthier” one. But what a man!

On July 23, 1990, the taste of the great restaurateur’s fries will be forever changed. The company then replaced the famous Formula 47 with vegetable cooking oil.

Those who thought McDonald’s fries were only made from potatoes are wrong. And maybe these are the same people who thought nuggets were little bites of heaven before they discovered their true makeup.

Grant Imahara reveals that there are 19 different ingredients! There are thus, oil, chemicals with flavor enhancer and preservatives.

The potatoes are peeled, cut and then dipped in dextrose to give a unique and golden color! So we know that McDonald’s fries do contain potatoes, some thought a special batter was used.

Today the fast food giant has a partnership of more than 35 years with Mc Cain. The group based in France indeed supplies restaurants in France.

In total, no less than 33 hectares of land produce 600 tonnes of frozen fries… per day! This partnership therefore attests to the restaurant owner’s desire to fundamentally change its practices and its image, and it also guarantees 100% French fries! And that we like.

Thus, the one we saw as the king of American junk food has become an ally of French agriculture and made in France. French fries and potatoes still have a bright future ahead of them!

Kylie Jenner blonde: she opts for an ultra comfortable look on...