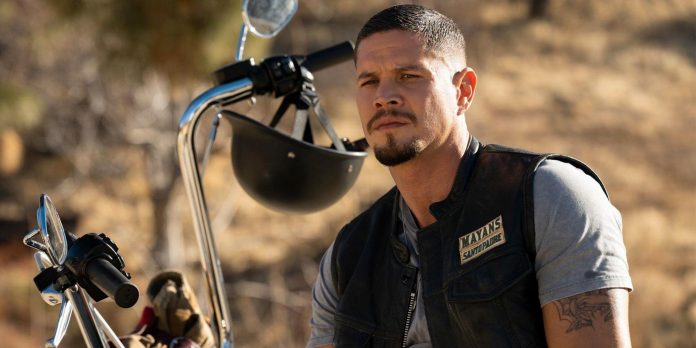 Co-creator and showrunner of Mayans MC Elgin James talks about the development of the main character EZ in season 4. Mayans MC is a spin-off of the long-running Sons of Anarchy series and features another motorcycle gang and similar themes of revenge and corruption. The series stars J.D. Pardo, Clayton Cardenas, Sarah Bolger, Emilio Rivera, Michael Irby and Edward James Olmos.

Mayans MC follows EZ (Pardo), who starts the series as a potential customer of Mayans Motorcycle Club. In the series, he rises through the ranks of the organization and becomes de facto president after the expulsion of former President Alvarez (Rivera) and refusing to negotiate peace with the rival SAMCO gang, which is likely to lead to war. A war between the two factions has been brewing for Mayans MC for a long time, and the new leadership of EZ is likely to escalate the conflict if the series is renewed for season 5.

In an interview with Deadline, James talks about how the role of EZ was reduced to his indecision and how it was no longer a factor for him. He clarifies by saying that EZ always had a way out of the gang, but circumstances did not allow him to use it. EZ seems to finally realize this in the fourth season and as a result fully commits to be the head of the gang and make decisions that others do not want to make. Read his full quote below:

Yes, we always knew we wanted to go there. In season four, we definitely stepped on the gas a little bit. When creating these characters, Kurt [Sutter] and I talked about how EZ had this path and he was going to go to Stanford, but it would never happen. The universe was going to throw him out where he belonged—that would always be his destiny. For three seasons he wasn’t sure if he was in the game or not, but now he’s fully in the game. He makes the wrong decisions, but he handles it the same way he did with his dog when he was little, where he did things that no one else could. . That’s what he’s doing now with a club where there’s an ego, like with Bishop [Michael Irby], Angel [Clayton Cardenas]. And I’m not talking about ego in a negative sense.

James also mentions that EZ makes the wrong decisions the right way, but now that he’s in charge, he’ll have to make much more important decisions moving forward. Thanks to the fact that James became the only showrunner of Mayans MC in season 3, the series was able to better assert itself and come out of the shadows Sons of anarchy. As a result, EZ’s growth as a character allows the series to develop in directions it couldn’t before, differing from the show that spawned it.

Although Mayans MC struggled to find his own voice, his compelling characters have been a force from the beginning, a force he has maintained throughout his existence. As James and his team continue to put bold touches on the story, we hope that it will be able to reach the heights of its predecessor. After all, season 4 of Mayans MC has left a lot of unanswered questions, and we hope that the upcoming season 5 will continue to explore EZ’s dark path as the new club president.

Beetlejuice: 10 other Burton works that would be great on stage