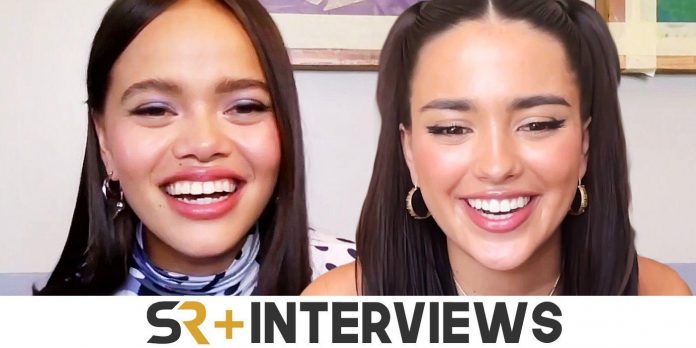 HBO Max’s Pretty Little Liars: Original Sin begins a new chapter of the hit Freeform series Pretty Little Liars, which ran from 2010-2016. Starring the likes of Bailee Madison, Chandler Kinney, Mallory Bechtel, and Zaria, Original Sin takes place in the town of Millwood and centers on a group of high-school-age girls who become involved in a murder mystery.

Also featured among the show’s main cast are Maia Reficco and Malia Pyles. Reficco plays Noa Olivar, a track star with a no-nonsense personality. Pyles portrays Minnie “Mouse” Honrada, the introverted youngest member of the Little Liars, who has undergone childhood trauma. Prior to Original Sin, Reficco starred in the TV series Kally’s Mashup. Pyles’ filmography includes roles in Batwoman, How to Get Away with Murder, and The Fosters.

Related: Original Sin Has An Advantage Over Past Pretty Little Liars Shows

Screen Rant spoke with Reficco and Pyles about the complexity of both Noa and Minnie, as well as what they’d like to see next in Pretty Little Liars: Original Sin.

Screen Rant: Noa has somewhat of a troubled past, but part of her strength lies in her athletic talents. What was it like for you to play such a complex character?

Maia Reficco: As a Latina woman, first Latina Liar, seeing characters that are written for people like me that have that level of complexity in mainstream YA media isn’t really the norm. So, getting to read her and get to know her was so moving and exciting. I could not wait to get on set every single day.

I think there’s so much beauty in finding who she is behind that tough girl façade that she puts on. Moving away from stereotypes and moving away from whatever might appear from the outside was honestly my favorite part of portraying Noa, and I love her, and I think she’s awesome. Above all, she’s a loyal person. That’s something I admire a lot in people, so getting to play that on screen was also really fun.

With Minnie, her childhood trauma is an important part of her story. Malia, how did you approach this role in terms of illustrating how that trauma and isolation impact her sense of self?

Malia Pyles: I think having such a defining moment touch every part of her life and how her mother has isolated her, and how they kind of made her fear a lot of the world, and what that does to a person psychologically, she doesn’t have a lot of community. She goes home and she works at the pawn shop that’s under her apartment, and then she goes online in her room.

So, it’s like she kind of revolves around these four corners. It’s that that creates this curiosity that’s so powerful and motivates Mouse throughout the entire season because of the solitude that she’s had to experience for so long. So, it was something I had to do with sensitivity, of course, and be specific about the way that she moves now, discovering friends and being so excited and gleeful, but also still maintaining the fact that she’s been wronged in life and that she’s distrustful, so she’s delicate about when she chooses to speak and chooses to show her true self.

In what ways do both of you relate to your character the most?

Maia Reficco: In so many ways! I love Noa and I feel like we’re both so similar to our characters. I think Noa’s so straightforward, and very honest, and straight-to-the-point. I’m very much like that too. Also, the irony and the sarcasm, I don’t even know if that was written in at the beginning. I would just read lines like that [laughs]. I’m not that funny. I’m just funny to laugh at, not with. I would say I do relate to a lot of things that Noa has and does and I prioritize my mom and my brother over everything in life, so I do really love that aspect of her.

Malia Pyles: For me, I think I’ve always been very introverted. I was a super shy kid and definitely throughout high school, I felt kind of othered. That wasn’t necessarily due to any circumstances, but it’s interesting with growing up and growing pains sometimes you can feel so isolated from your peers, so outside of the norm. So, it was really wonderful having an opportunity to capture a character that is on that journey of finding and accepting herself through her peers because it’s definitely something I had to go through, myself.

Maia Reficco: You know what I want, Malia [laughs]. I would say exploring herself outside of the group dynamic. I think so much of the mystery and the terror puts things into perspective and you prioritize, obviously, that and staying alive over anything else. But I would say getting to know her backstory a little bit more would be really interesting and who she truly is outside of all the external circumstantial stuff that truly made season 1 so exciting and exhilarating.

Malia Pyles: I find that Mouse is often running away — in one way or another — from from her circumstances and I would be really excited to see her embrace, in season 2, whether it be her home life or the things that are right in front of her instead of going in a direction that might be of more interest [laughs]. Mouse, settle down.

Twenty years ago, a series of tragic events almost ripped the blue-collar town of Millwood apart. Now, in present day, a disparate group of teen girls — a brand-new set of Little Liars — find themselves tormented by an unknown Assailant and made to pay for the secret sin committed by their parents two decades ago…as well as their own.