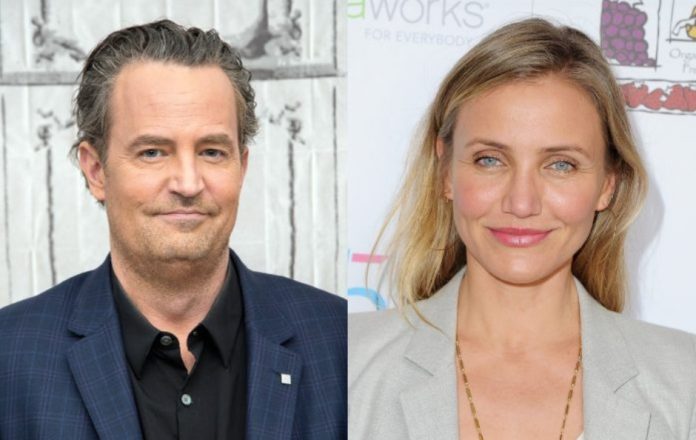 Perry said he replied: “Are you fucking kidding me?”

Matthew Perry has claimed that Cameron Diaz “accidentally” punched him in the face during a group date.

The actor recalled the incident in his memoir “Friends, Lovers and the Big Terrible Thing,” where he said that the couple was created shortly after Diaz broke up with Justin Timberlake in 2007.

In the book, Perry recalls how Diaz “immediately got high” during their group dinner, and that she “wasn’t interested in [him] at all.”

According to Perry (via PageSix), after he said “something witty” to Diaz while playing Pictionary, the “Friends” actor claimed she “accidentally” punched him in the face while trying to hit him on the shoulder.

In response, Perry recalled saying, “Are you fucking kidding me?”

NME has reached out to Diaz’s representatives for comment.

Perry recently apologized for several remarks about Keanu Reeves in a memoir. In the book he asks: “Why are original thinkers like River Phoenix and Heath Ledger dying and Keanu Reeves still walking among us?”

After facing criticism over the comments, Perry released a statement to Deadline saying, “I’m actually a big fan of Keanu. I just chose a random name, my mistake. I apologize. I should have used my own name instead.”

Elsewhere in the book, published on Tuesday (November 1), Perry reported that he almost died four years ago from excessive opioid use after a ruptured colon. The actor spent two weeks in a coma, five months in the hospital and had to use a colostomy bag for nine months.

In a recent excerpt, the actor also claimed that he kissed Eddie Van Halen’s wife, Valerie Bertinelli, when the guitarist was drunk.

The Boys Have Reportedly Added DC and a Marvel Vet for...