Home Entertainment Matt Healy From 1975 Went Viral For Yelling at Security With Auto-Tune. 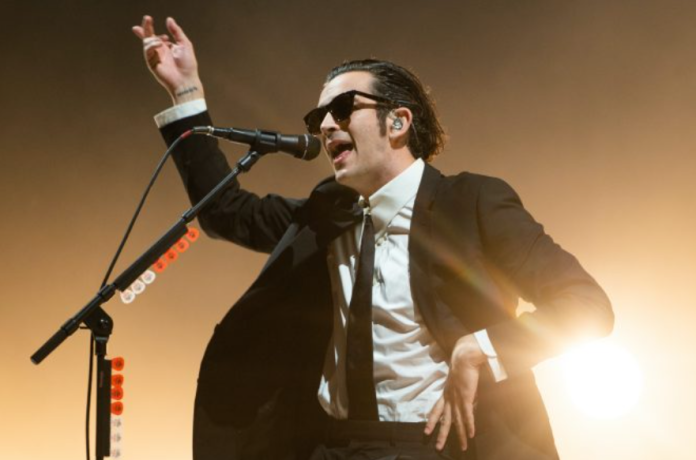 1975 frontman Matty Healy hit the headlines again after a video surfaced in which he asks security to help a fan at their Phoenix show using an auto—tune microphone – watch it below.

The band was in the middle of performing a piano version of “I Like America & America Likes Me”, for which they usually use a microphone to mimic Healy’s auto-tuned vocals on the original studio recording.

During the show, Healy noticed that a fan had fallen in the crowd and told security: “Someone fell over there, go and deal with them, damn it. Stop standing there like a bunch of jerks,” to the applause of the crowd.

The video, shot by a fan named Claire and posted on TikTok, has been viewed almost 740,000 times. You can watch it here.

This isn’t the first time Matty Healy has gone viral for his antics on stage while The 1975 are touring the US. Last night (November 25), footage appeared on social networks showing him bringing a Robbers fan during a tour stop in Las Vegas and kissing her on the lips.

Matty Healy kissing a fan on stage during robbers #the1975 pic.twitter.com/upTlRFxzOQ

The show also includes an interlude that has become a staple of their current concert performance: he caresses himself on the couch, and then moves to the carpet, takes off his shirt and eats raw steak. Then he does a repeat of push-ups and climbs into the hollow TV.

In January 2023, The 1975 will bring their “At Their Very Best” tour to the UK and Ireland. Yesterday, singer Bonnie Kemplay, who has just released her debut EP, “Ends, What to Say, What to Do,” was announced as their opening act. You can see the full list of dates below and buy tickets here.

GTA 6 in a leak between the release period and the...