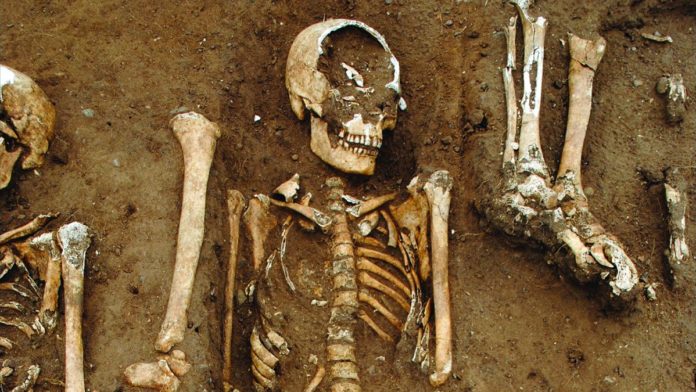 The plague epidemic, one of the darkest moments of the Middle Ages, caused many people to die. After this incident, a mass grave of this disease, which is called “black death”, was found. This mass grave found by archaeologists was recorded as the first mass grave outside of London due to the black death, also known as the plague epidemic.

In the examination made by the researchers, interesting details were observed in the remains of the graves. Approximately 24 child bodies were found in the grave, where more than 48 people died. The mass grave was found in the 14th Century Abbey Hospital of the North Lincolnshire area. The researchers stated that given the size of the pit, people living around the monastery were very likely to have died due to the plague.

Archaeologists sent their findings from the skeletons to McMaster University in Canada. As a result of the examinations, they discovered the presence of Y. pestis, the plague, in the DNA of the skeletons. New evidence has been dismissed from previous assumptions that smaller populations of rural communities can better deal with plague deaths. Based on all this information, the researchers wrote an article on this topic.

Dr. from Sheffield University. “Currently half of England’s population is estimated to have died during Black death, but Willmott is still extremely rare to find related to the event. It seems that local communities continue to dispose of their loved ones as ordinary as possible,” Willmott said in a statement. said.

What is black death?
Black death broke Europe in the middle of the 14th century and killed tens of millions of people. According to the estimates made as a result of the researches, until 1353, half of the British population died due to the Yersinia pestis bacteria found in fleas living in mammals around human settlements. It is thought that the plague epidemic could be caused by the deaths that occurred during that period. This epidemic caused the deaths of millions of people at that time and was transmitted to many countries and people in various ways. Due to the helplessness of people and the rapid spread of the disease, these deaths appear with the nickname ‘black death’.

BTS RECREATES THE CHOREOGRAPH OF ‘EGO’ ON THE BEACH (VIDEO)

A YouTuber, S.T.A.L.K.E.R. Reinterpreted Screen Shot of 2 with CryEngine

iPhones restarted with iOS 14 are in danger