Home television Masked singer William Shatner on what he learned from his “unusual” experience... 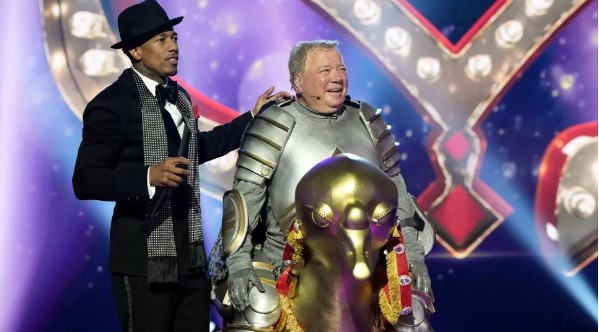 What did William Shatner learn from his “Masked Singer” experience?

The eighth season of The Masked Singer promised viewers an exciting and new approach to the process of exposure, and this change showed how unpredictable this season will be. There was a double reveal in the first episode, which in part led to the Hedgehog, who eventually became Monty Python icon Eric Idle, going home. But he wasn’t alone, as another TV icon, William Shatner, also ruined his dreams of a golden mask. After his exclusion, the Star Trek veteran got the opportunity to talk about what he learned from his “unusual” experience in the series.

The former participant of the “Masked Singer” impressed the audience and panelists as a Knight. As soon as he started singing Fred Astaire’s classic “Puttin’ on the Ritz”, his conversational singing style became noticeable, as judges Robin Thicke and Nicole Scherzinger quickly called him. Although his participation in the singing competition was short-lived, Shatner seemed to enjoy his experience, calling it “the most extraordinary experience I’ve ever had.” But the 91-year-old actor drew one conclusion from his unique performance, telling EW:

”Well, I took away a limp from the costume. Some blood. [Laughs] Oh, I don’t know. I took away one of the more unusual experiences I’ve ever had. … the truth of the matter is, my memory of everything there is clouded by how awkward and painful the situation I was in was. And the funny part is, that I had talked to a friend of mine that had been on the show before. And he said it was the worst experience of his life. I said, ‘Oh, come on. You never had a baby.’ And now I realized he’s right. [Laughs] It was tough. That wardrobe was tough. And I think that’s part of the show. Part of the fun of The Masked Singer is how awkward everybody feels. I heard somebody say they had a panic attack. And I was close to that myself, not being able to breathe.”

It turned out that the Knight had shed blood without a joust. Bleeding while trying to move and sing sounds quite excruciating. Panic attacks certainly happen. Unfortunately, that’s exactly what happened during Bobby Brown’s experience as a Crab in season 5. Having to move and sing in a concealing costume would be uncomfortable for anyone, especially those over 90. Captain Kirk isn’t the first contestant to talk about these elaborate costumes, but it’s part of the charm of the Masked Singer.

William Shatner put the whole experience in perspective, saying that singing in a costume is almost impossible. He even suggested that the show makes the costumes “so clunky” so that everything is fun and chaotic. The Boston Legal star made an illogical suggestion, mentioning that “they could have put someone else inside and I could have sung it better [backstage].” While this is a sound idea, the show wouldn’t be what it is if the competitors weren’t actually hiding behind a mask.

Now that the Knight and the Hedgehog are out of competition, viewers will have to wait until next Wednesday to find out who is behind the Hummingbird. “The Masked Singer” will air on Fox at 20:00 ET. If you want to keep up to date with new episodes and other TV shows, check out the CinemaBlend TV program for 2022.