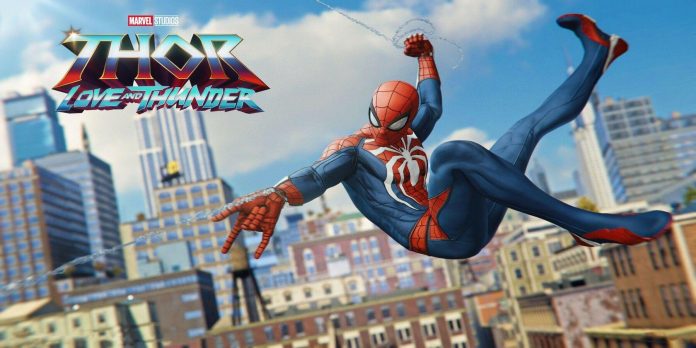 Marvel’s Spider-Man is known for its first-class photo mode, as well as a dedicated community that uses it constantly. One common action was that players created posters in Marvel’s Spider-Man, and recently a Redditor user continued this trend with some images based on Thor: Love and Thunder.

“Thor: Love and Thunder” is the last part of the MCU and the fourth film of the “Thor” franchise. Created by Taika Waititi, the director of Thor: Ragnarok, the film has the same over-the-top visual style and whimsical comedy that made its predecessor so successful. Although its reviews were less strong than expected, with critics citing pacing issues in the first half of the film and the lack of scenes with Gorr, the Butcher God, as key issues, it still has a lot of personality. This personality extends to the film’s posters, and Reddit user LobokVonZuben pays homage to the design.

While Marvel’s Spider-Man posters are nothing new, the focus is usually always on live-action Spider-Man movies. This makes sense given the fact that most of the costumes from these films are in the game, and it’s much easier to create an homage to other Spidey content in a game based on the same character. However, LobokVonZuben took it upon himself to create several Marvel’s Spider-Man posters with the atmosphere of Thor: Love and Thunder, and their hard work paid off.

The posters of this fan depict Peter Parker in a “Spider-Punk” costume, which seems to be an appropriate choice, given the tone of the movie “Thor: Love and Thunder”. The redditor manages to capture the blue and orange sky in the background, which is the key to conveying the feeling of the original posters they were inspired by. In the first of these images, which the artist aptly called “Web and Thunder”, Spider-Man jumps into the air with his hand raised to the sky. In the second poster, the hero falls to the ground with a close-up on his mask, which is a particularly neat angle.

What really makes these posters work so well is the ability of the Electric Punch suit, which fans can access through an electrically insulated suit. Fans have already used this ability to recreate the powers of Miles Morales in the original Marvel Spider-Man, as Electric Punch adds several lightning-covered punches to Peter’s arsenal. This blue electricity is visible on his hands on both posters, which allows the characteristic power of Thor to be present in a magnificent pair of images.

With the advent of many more MCU films, including “Black Panther: Wakanda Forever,” perhaps fans will remake a few more posters in Marvel’s Spider-Man games. For now, however, fans can appreciate this Rush-like Spider-Man design.

Marvel’s Spider-Man is already available on PS4 and PS5. The PC version will be released on August 12.