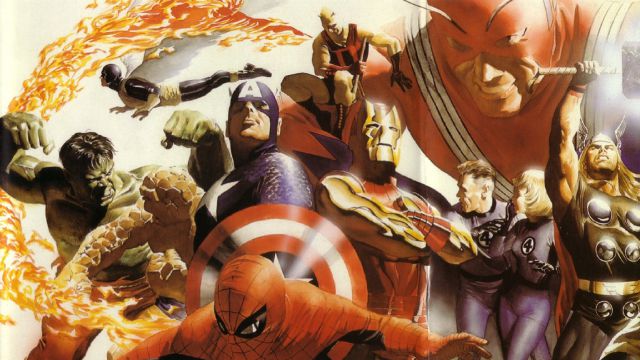 Marvels: Kurt Busieky Alex Ross build the chronological account of the Marvel universe from the point of view of an ordinary person. Marvels is a jewel, a different look at the world of superheroes that won four Eisner Awards in 1994: best limited series, best cartoonist (Ross), best cover (Ross) and best unit number (# 2 Monsters). In the words of Stan Lee it was “a giant step that takes us to a new peak in the evolution of illustrated literature.” That is, we are facing one of the best Marvel comics in its long history.

The idea for the series arises from a very young artist who had already drawn attention for his participation in the miniseries Terminator: The burning (1990), in which he does all the artistic work: pencils, colors and covers. Nelson Alexander Ross was planted in Marvel with the project of a limited series of 10 independent numbers with the most prominent characters of the Marvel universe.

Busiek was at that time a veteran screenwriter who had been in the industry for 12 years and who was known for enhancing the more human aspect of the characters. When Ross, whom he knew from a previous Marvel project that was canceled (Open Space), explained the concept to him, he immediately saw the potential it had, but introduced an outside figure, photographer Phil Sheldon, as a common link between the ten stories . But despite the visual power of Ross’s drawings and the fact that the story was good, the publisher did not approve of the series. It was the direct intervention of Tom Defalco, Marvel’s editor-in-chief, who made the necessary adjustments for the work to begin: first he reduced the ten numbers to four and secondly he proposed that it be a story of the Marvel universe from its beginnings (Atlas Comics) to the present (decade of the 90).

Superheroes in the background

From here Busiek builds the history of the prodigies, as the protagonist calls them, based on the most relevant moments of the Marvel universe; the difference is that he uses the journalist’s eye to narrate the events, the superheroes becoming secondary characters. Where epic battles were drawn in the rest of the comics, here the focus is on the damage they cause; Instead of heroism, the pages reflect the fear and defenselessness suffered by the population as new super-powerful beings appear.

The journey is a delight both narratively and visually. Both artists carry out exhaustive research work for the work that leads them to review a huge amount of material. Busiek, to build a coherent argument; Ross, so that each of his vignettes is faithful to what has been published. The story begins with the original Human Torch (1939), which is considered the first Marvel superhero, and throughout the pages we learn how citizens normalize the appearance of new figures: Namor, Captain America, The Fantastic Four … and how these influence their daily lives. In Marvels not only superheroes have a place, villains also have their space. Events such as the arrival of Galactus, Namor’s attacks on New York or the battle between Spiderman and the Green Goblin are told from the point of view of the citizen.

Phil Sheldon’s story runs parallel to that of the beings who frighten and fascinate him in equal measure, he is a privileged witness of his birth and great events, but he also suffers the consequences: he loses an eye, his moral convictions stagger with the appearance of the mutants and initiates a personal crusade to rehabilitate a reviled Spiderman.