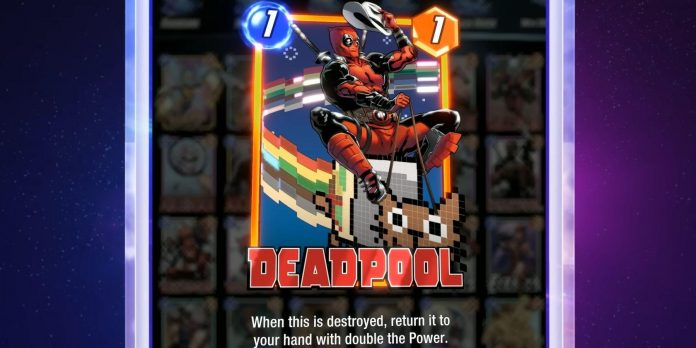 Marvel Snap is the first game of a “young” studio, and the opportunity to work at Marvel is a huge opportunity, and one developer talks about these advantages. At the Disney & Marvel Games Showcase, Disney shared a new Marvel Snap trailer, which demonstrated the gameplay and some features. In the trailer, much attention was paid to the mobility and simplicity of the Marvel Snap, and attractive illustrations on maps were also presented.

Marvel Snap is a collectible card game created by Second Dinner, a studio consisting of former Hearthstone developers, whose publisher is Nuverse. It was officially announced back in May for mobile and PC. Marvel teased the Marvel Snap the day before the announcement with a short video on its Twitter account featuring Ironheart, America Chavez, Venom and others. Now fans watching the game have learned more, and at D23 Game Rant had the opportunity to talk with Second Dinner Development director Ben Broad about working with Disney on their first studio game.

Broad mentioned that Second Dinner was lucky enough to work with Marvel on its first game, as this is obviously a huge “income” for a studio of any level. According to Broad, Marvel is helping in the development of Marvel Snap in all departments, making sure that everything is accurate. Broad then talks about specific details, such as keeping a certain shade of pink on Gambit cards, as an example of Marvel’s collaborative efforts. However, he also mentions that Second Dinner can do whatever he wants and that Marvel isn’t breathing down his neck.

Judging by the response, it looks like Marvel is giving Second Dinner a lot of freedom in how the development team can approach iconic Marvel characters. Marvel pays special attention to detail, as shown in the Gambit example, but Second Dinner seems to be able to do whatever it wants. This feeling is probably extremely inspiring for any developer, not to mention a beginner. In addition, given the team’s extensive experience with Hearthstone, it will be interesting to see how Second Dinner implements its ideas in Marvel Snap.

Marvel previously presented a review of the Marvel Snap along with the initial announcement. Marvel Snap is a dynamic card game in which each match lasts about three minutes. In addition, more than 150 base cards are planned to be released on the first day, and even more will appear as content after the launch.

Other novelties were also presented at the Disney & Marvel Games Showcase, especially for fans playing games on mobile devices. However, perhaps the biggest news was the announcement of a new game featuring Captain America and Black Panther from Skydance New Media studio. Amy Hennig, creator of the Uncharted series, is overseeing the development of this currently unnamed project, but it’s clear that there were a lot of Marvel fans from all walks of life at the show.

Marvel Snap is released on October 18 on iOS, Android and PC.

Attack on Titan: Part 2 of season 4 is confirmed for...