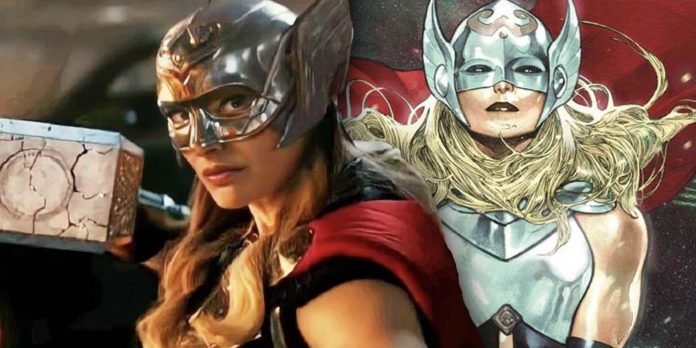 Marvel comics writer Jason Aaron explains the reason why he decided to make Jane Foster worthy of the role of the Mighty Thor in his cult run for the hero. In an interview with Entertainment Weekly, Aaron admitted that he liked the idea of elevating Foster, a character associated with the story of Thor Odinson in the comics, and placing her at the center of the Marvel universe in her own title. Obviously, the idea paid off.

While Thor Odinson has worn the mantle of Thor in comics since his debut in Jack Kirby and Stan Lee’s Journey into Mystery #83 in 1962, several other heroes have become worthy in comics. From Beta Ray Bill to Captain America, many different heroes continuously raised Mjolnir. However, Jane Foster’s path to owning the mighty hammer of Thor began somewhat unorthodox. Before officially assuming the mantle of the Thunder God in Aaron and Russell Dauterman running after a Marvel comics hero, Foster became Thor in “What If…?” #10 in 1978. But this story went beyond the Marvel Comics canon, even if it inspired later events.

In an extensive interview with Entertainment Weekly about Jane Foster, the creation of the character Thor in the comics and the movie Thor: Love & Thunder MCU, Marvel Comics screenwriter Jason Aaron explained why he chose a worthy character. Aaron explained his work on Thor with Russell Dauterman by saying that he wanted to put Foster at the center of the story, and not just as Thor’s buddy or love interest. He stressed the importance of her being the “main” Thor, and how exciting it was to explore the mantle through her eyes.

“I liked the idea of taking her, someone who has been in Thor’s story for almost as long as he has, but putting her at the center of this world for the first time-not as a love interest, not as a partner, but as Thor,” Aaron says. “She wasn’t Lady Thor. She wasn’t an offshoot. She wasn’t second only to the main guy. She was the main person. It was her book. This was her corner in the Marvel universe. explore it all through her eyes.”

Aaron added that after the decision was made to make her Thor, they had to decide how to make her experience with Mjolnir different from Thor Odinson’s experience and how it would affect Thor himself from Marvel. He described that it was important that her relationship with the hammer influenced Thor, as she could do what he could never do with Mjolnir.

“One day I said, ‘OK, we’re going to make her a Thor. She will be the central character. She’s the Mighty Thor,” part of it was: how is her relationship with the hammer different?” says Aaron. “That’s why he reacts differently when she throws him. She talks to him in a different way. Then when Thor Odinson comes back and sees it, it kind of drives the stake even deeper into his heart. He looks at the hammer and says, “It never did that for me.”

Ultimately, making Thor Jane Foster was a brilliant decision that led to one of the best current comics and arches for a Marvel Comics character. The reason to make her worthy made sense, and the rise of the character in the Marvel universe turned out to be a stroke of genius. Like Thor Odinson, Jane Foster was the real Thor, as she proved herself worthy of taking the mantle during her epic run as the God of Thunder. The success of the character has now led to her debut on the big screen in this role, which is more than a welcome sight.

Aaron Waters of Love Island Has Been Criticized For Body Shaming...