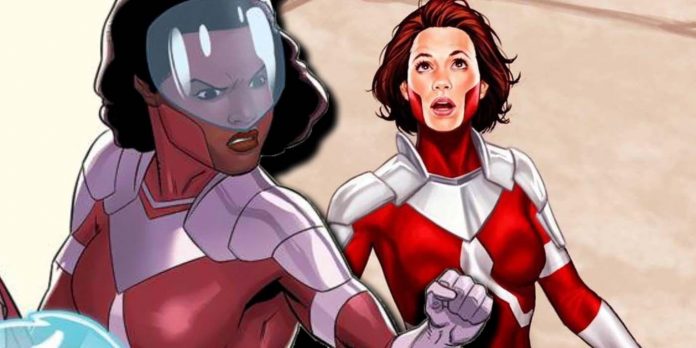 In Marvel Comics’ new artwork for the upcoming AXE: Judgment Day event featuring the Eternals, the Avengers, and the X-Men, readers couldn’t help but notice that Maccarie looked significantly different than usual, as she appeared white on the newly unveiled cover. art. Unfortunately, it seems that Marvel Comics repeated the past mistake and accidentally changed the complexion of the POC character, making the dark-skinned Makkari (based on the hero from the movie “Eternals”) completely look like someone else.

Recently, McCary has undergone significant changes since his first debut in Jack Kirby’s epic “The Eternals” series in the mid-1970s. Initially, the speedster was drawn as a white male, whose appearance mostly remained unchanged in different interpretations and stories involving the character. However, after Lauren Ridloff’s performance in the movie “The Eternals” in the MCU, the character was changed to look more like this version of the character. Like Ridloff, McCary is also deaf and uses sign language to communicate. The new Makkari has appeared several times in the Eternal comics series by Kieron Gillen and Esad Ribich and is going to play a role in the upcoming AXE: Judgment Day event. However, the new art shows that Marvel is making the same mistake with the character’s skin color that they made just a few months ago.

Marvel Comics has shared Mark Brooks’ new cover for the upcoming AXE: Judgment Day #5 by Kieron Gillen and Valerio Skiti, in which the Eternals, X-Men and the Avengers come together under the shadow of Celestial. At first glance, the image seems to be a good group shot, but on closer inspection, the color of Makkari’s skin has changed, since she looks white in the image.

For reference, here’s how Makkari looked in one of the last episodes of “Eternal” next to her colleague from the MCU.

Now, it’s important to note that Brooks or the creative team don’t seem to have committed any malicious acts, but this isn’t the first such mistake in the last few months. Back in April, Marvel announced that they were changing the skin tone of America Chavez after the preview art for the new series of “Thunderbolts” made her look more like a white woman than usual.

Perhaps the mistake with the Maccarie skin tone was made due to possible viewing of old reference images of the white male version of the speedster, or simply due to confusion in the characters, or because of a simple mistake in coloring. No matter what happened, Marvel will need to fix Maccarie’s mistake before the release of AXE: Judgment Day. This is a mistake, but the fact that it happened twice in a few months is unacceptable. We have reached out to Marvel for comment and will add their response to this post if we receive it.