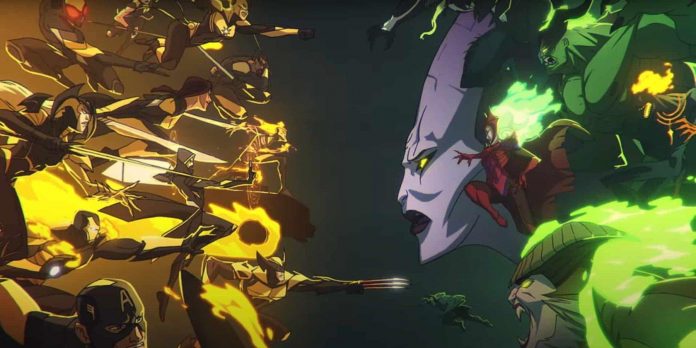 The first ever Disney and Marvel Games Showcase was generally ambiguous. Despite some interesting discoveries, such as the Skydance game Black Panther and Captain America, there were several glaring omissions, lackluster ads, and everything was happening at such a breakneck speed that it was hard to remember any of the games shown in detail. But one of the highlights of this lively event was the movie “Midnight Suns” from Marvel and its short trailer for a series of upcoming animated short films.

Along with the confirmed release date for the next-generation versions of Marvel Midnight Suns, developer Firaxis has released a one-and-a-half-minute trailer teasing a series of animated short films due to air at the end of October. Officially called the “Prequel” short films, it seems that these animations will provide a bit of the backstory of the Midnight Sun characters and the general background before the game’s release in December. With a style inspired by the 90s and some striking visuals, these animated shorts can be the perfect way to separate the Firaxis line of heroes from their MCU counterparts.

The Marvel cinematic universe is one of the most popular entertainment venues on the planet, which has been growing exponentially over the past decade. About two MCU films are released annually and several shows are broadcast on Disney+, so it’s impossible to escape the cinematic universe. In this case, it is very likely that the MCU now serves as an introduction to Marvel comics for many newcomers. For many, Robert Downey Jr.’s Iron Man, Chris Evans’ Captain America, and Scarlett Johansson’s Black Widow are the only versions of the character they’ve ever known.

Based on the trailers released so far, it seems that versions of these beloved Marvel’s Midnight Suns characters may be straying from the MCU path. For example, while Dr. Strange from the MCU can be cold and calculating, he still tends to put his allies first. Firaxis’ version of Doctor Strange seems a little darker, closer to his appearance in the comics.

These upcoming animated shorts are the perfect way to highlight the differences in versions of popular Marvel characters from Firaxis. Although characters such as Iron Man, Scarlet Witch and Spider-Man are included in the Midnight Suns starter list, it’s safe to say that they will be very different from their more carefree counterparts from the MCU, and these animated shorts are the perfect option. a way to prepare the audience for this tonal shift.

These animated shorts are also a great opportunity to introduce MCU fans to some of the lesser-known characters who will appear in the Midnight Suns team. While regular MCU fans may know about characters like Blade and Ghost Rider, they may not know too much about their powers, abilities, or their origins. When it comes to very little-known characters, such as Magic from “X-Men” or Nico from “Runaways”, even some avid Marvel fans may need to refresh their memories of their origins and abilities.

Fortunately, it seems that these animated short films will do just that. Starting on October 31, just in time for Halloween, Firaxis will be releasing short cartoons weekly. There will be five in total, with the first representing Lilith, the main antagonist of the game. The rest, according to the official description of Firaxis, will apparently introduce the Midnight Suns team itself, explain why it was formed, and show the motivation of each character to join it. For a game like Marvel’s Midnight Suns, where the plot and main characters are not all well known, releasing animated short films as a prequel is a very smart move.

Midnight Suns from Marvel is released on December 2 on PC, PS5 and Xbox Series X/S. Versions for PS4, Switch and Xbox One will be released later.

“Better call Saul” connects the scene of season 5 with the...