Home Entertainment Marvel Crossover Is Too Far for Assassin’s Creed 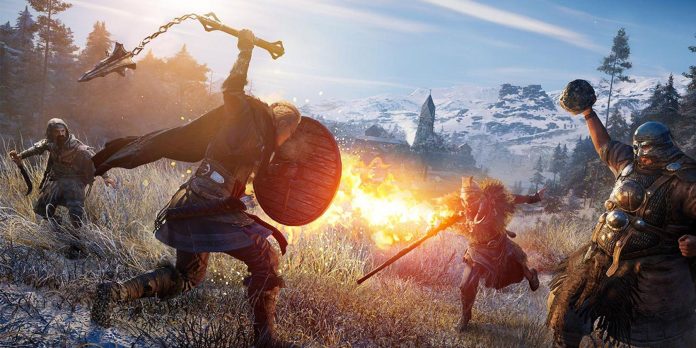 Recently, a dataminer known as AndyReloads uncovered various armor sets in Assassin’s Creed Valhalla that seem to be heavily inspired by Star Wars and Marvel Comics. Specifically, these armor sets seem to be inspired by the armor worn by Stormtroopers and Iron Man as well as a set inspired by Thanos. Ubisoft has made no indication that these sets will be released, but they are present in the game files. This comes fresh off the heels of an expansion that has taken players far away from the life of the Viking Eivor and into a story heavily rooted in Norse Mythology.

It seems like Ubisoft is straying farther and farther away from the Assassin’s Creed formula that was laid down in the original game. Already, Assassin’s Creed Valhalla and Odyssey have been accused of not actually doing much with the core concept. On top of that, the series has been playing heavily with more mythological elements through expansions like Dawn of Ragnarok, which isn’t bad but is a step away from the franchise’s former core identity. These Marvel Comics and Star Wars-inspired armor sets are the latest in a long line of things that have pulled the franchise away from what made players love it in the first place, and it feels like this may be one step too far.

These Marvel and Star Wars cosmetics were discovered by a Youtuber and dataminer AndyReloads. He filmed a video of Assassin’s Creed Valhalla in which he was walking around in a suit that looks a lot like a Stormtrooper. The suit also seems to come with the ability to fire a chest laser that seems very similar to the arc reactor that Tony Stark uses in Iron Man. He has branded the armor set as a Stormtrooper-esque armor, but the abilities that it gives the player would put it far more in line with that of Iron Man. It also looks like it is made up of the technology that the Isu race of Assassin’s Creed would use, but it very much is rooted in the Marvel Cinematic Universe.

It is not the only Marvel-themed outfit that AndyReloads has discovered in Assassin’s Creed Valhalla. Earlier this year, he discovered an armor set that is known as the Master of Elements. At first glance, this outfit seems like a pretty standard Assassin’s Creed armor set until players look at the gloves and see stones that look very similar to the Infinity Gauntlet that Thanos wields in Avengers Infinity War. The gloves are adorned with different colored lights that look like Infinity Stones, and it will apparently give the user different powers depending upon what stone is in active use. While players will probably not be able to snap half of all life out of existence, they will be able to utilize the powers of the stones to give themselves an edge in combat.

The Series Has Already Deviated From Assassin’s Creed

These Marvel-inspired suits are only the next step for a franchise that seems to be pulling away its core. The Assassin’s Creed franchise was built on the idea of a secret war between Assassins and Templars that has raged throughout history. Players had to explore the memories of these ancestors to uncover things to continue the fight during the modern day. The series also included an advanced race of people known as the Isu that created humanity and the sought-after pieces of Eden.

The latest Assassin’s Creed titles have not only completely changed the gameplay to make it more of an expansive RPG, but it has also seemed to deviate from the core conflict. For the past couple of years, players have felt like the series has moved too far away from the Assassin and Templar conflicts. The last two games have not even put players in control of an assassin character; instead, players got to control a Greek mercenary and a Viking. While they may do some assassinations, these characters are not assassins. The games have put a heavier focus on exploring the world and grinding out XP than they have on the war between the two factions.

Assassin’s Creed has also begun to increasingly focus on mythological elements. While science fiction and mythological elements have been a part of many of the entries, these last couple of titles have taken it to the next level. Most recently, Assassin’s Creed Valhalla made Norse Mythology a core part of the game and released an entire expansion solely focused on those stories called Dawn of Ragnarok. Players not only followed the story of a Viking, but they also played as Odin himself. The story was heavily rooted in Norse mythology instead of the Assassin’s Creed story.

Marvel Cosmetics Are the Next, but Not Best, Step

Many fans are already angered by the deviation from the core Assassin and Templar story, and these Marvel cosmetics may be the final straw. The series has always been about exploring history with some sci-fi elements, but these Marvel costumes do not really have a place in that concept. Eivor is supposed to be a Viking warrior living in the past and dealing with all the hardships that would create. They are not supposed to be Iron Man shooting lasers at his enemies or Thanos fighting against swords.

The series has always included sci-fi elements, and these costumes could feel like an extension of that. They also serve as simple nods to one of the biggest franchises around, but it may fall very flat for people who have loved Assassin’s Creed since it began. Already, there has been some criticism over where the series is headed and this seems to be a symptom of that direction. It could very well further anger the fanbase, and further turn some people off from a franchise that was supposed to be an exploration of history.

There has been no announcement by Ubisoft that these costumes will be added to the game, but they exist in the files. This makes their inclusion a very real possibility, and that may further tarnish a franchise that is already in hot water with its fanbase. Time will tell how the fanbase will react to these sets, but it may be a worrying sign for just how far the series will go.

Grey’s Anatomy: What we suspected about Sandra Oh’s departure from the...