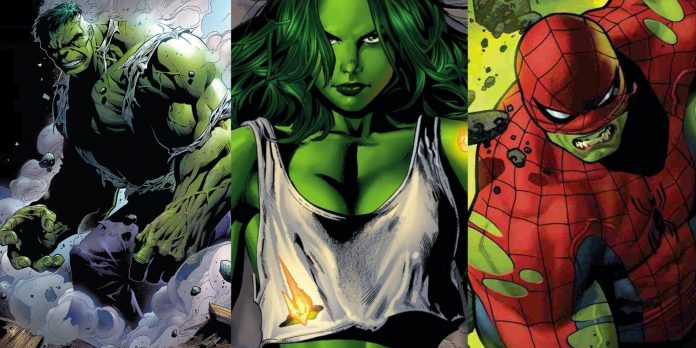 The Hulk continues to evolve since his debut in The Incredible Hulk #1 in 1962, not only changing colors several times but exploring new powers and forms in different versions of comic continuity. Other Hulks like the She-Hulk emerged in later years, competing for the title of the strongest version of them all.

Updated July 26th, 2022 by Darby Harn: She-Hulk: Attorney At Law promises at least one powerful Hulk version in Jennifer Walters and possibly more. Trailers for the upcoming streaming series reveal the show will introduce many new characters to live-action, and some may include strong Hulk forms so far only appearing in the comics. With Jennifer’s association with a supermax prison containing Abomination and other key Marvel characters, the likelihood that General ‘Thunderbolt’ Ross appears increases. He perhaps transforms into the Red Hulk, a major Hulk form from the comics and a figure connected to the Thunderbolts, due to get their own movie in Phase 5.

Created by writer Stan Lee and artist Jack Kirby during their historic creative run early in the Marvel Universe, the first Hulk possessed superhuman strength but wasn’t very fast or agile. He also lost all of the brainpower of Bruce Banner when he transformed, rendering him a mindless brute easily manipulated by villains like Loki.

The dichotomy between the intellect of Banner and the brawn of the Hulk dominated the evolution of the character going forward, and much more stronger Hulk forms integrated both brains and brawn.

The Ultimate Hulk ripped the adamantium-laced Wolverine in half, easily cementing his status among the most powerful Hulks in the comics. Despite this, the Earth-1610 Hulk tops out in power and ability well below his Earth-616 counterpart. He lost major battles to Hercules and Thor, two characters the main Marvel Universe Hulk fought to a standstill.

This Hulk also fell under the influence of Kang, among the most powerful Kang The Conqueror variants in the comics, who used him to collect the Infinity Stones for her.

The Hulk’s color changed in the second issue of the series in 1962 because the colorist, Stan Goldberg, had trouble realizing the gray color given the limitations of the era. Still, differences exist between the gray and green versions. The Incredible Hulk generally packs more punch than his gray predecessor, and is also much more agile and can jump enormous distances.

The green Hulk proved his incalculable strength early on when he fought Hercules to a stalemate. Comic book fans know Hercules possesses god-like strength, but it wasn’t enough to defeat the Hulk in their first encounter in Tales To Astonish #79.

The Cosmic Hulk shares the powers and abilities of the regular Hulk, including the ability to absorb and emit gamma radiation. His powers derive from a vastly different source, however. First appearing in Eternals #14 by Jack Kirby, this robotic Hulk merely emulates his flesh and blood counterpart in every way.

The robotic Hulk drew energy from the Uni-Mind but itself became a mindless instrument used against innocent civilians and even the powerful Doctor Doom in Incredible Hulk #606.

Hulk 2099 possesses the general strength, stamina, and endurance of the regular Hulk, with additional physical attributes like razor-sharp claws capable of slashing through solid steel and a long tongue. He also retained his intelligence and could transform back and forth at will from the Hulk to his human alter-ego John Eisenhart.

Hulk 2099 in some ways shared more in common with She-Hulk than his 21st-century namesake, being an attorney practicing law in a dark, dystopian future.

Jennifer Walters received a blood transfusion from Bruce Banner, giving her most of his powers. Unlike him, she retains her intellect in the Hulk form and her super strength in human form, giving her a slight advantage in terms of power potential. Since her power stems from how angry she gets, like him, the limits to her strength and endurance remain largely unknown.

The Hulk at times proved he was stronger than She-Hulk, especially during World War Hulk, but both have since leveled up considerably, leaving the question open for debate in the comics and the upcoming Disney+ She-Hulk: Attorney At Law series.

The strongest Hulk versions in the comics integrated Banner’s brains and Hulk’s strength. Professor Hulk numbers among the most powerful, emerging when the individual traits of the Hulk merged into one being during Peter David’s run in the early 1990s, among the best Hulk comic book storylines ever.

Professor Hulk embodied all of the strength, smarts, and potential of every version of the character to that point, finally leveraging Hulk’s full potential. He also provided the basis for the Professor Hulk in Avengers: Endgame.

Several Spider-Hulks exist within the Marvel multiverse in the comics, but they all share a powerful quality. Spider-Hulk combines Hulk’s unimaginable strength with Spider-Man’s superlative reflexes and agility. Armed with Spider-Sense, this Hulk anticipates threats before they occur, making him even more powerful than before.

A Spider-Hulk likely appears in the MCU as The Multiverse Saga progresses, and could draw from any version, including the original who first appeared in Web of Spider-Man #70 back in the 1990s.

Another major Hulk emerged from the Peter David run, though the Maestro proved among the Hulk’s most powerful villains in the comics. The Maestro Hulk also retains his intelligence in his hulked-out form and gained increased strength and endurance from additional gamma-ray exposure, and his power led him to kill off every other superhero on the planet.

The Maestro hails from one of the darkest future timelines of Marvel Comics, debuting in the Future Imperfect mini-series back in 1992. Later comics brought him into the present day and he likely appears in the MCU at some point given his importance.

Hulk used the alias Green Scar while he was living and fighting as a gladiator on the planet Sakaar. He became one of the strongest Hulks during his time on the alien world, where his strength and power increased along with his fighting prowess in the arena. Green Scar eventually fought his way to the throne of Sakaar, defeating many powerful alien beings along the way.

He emerged in the iconic Planet Hulk storyline, which later inspired aspects of Thor: Ragnarok. This storyline also led to World War Hulk, which the MCU also likely adapts in some form.

The Red Hulk absorbs radiation from other people, increasing his strength and power to unimaginable limits. He defeated She-Hulk in their first encounter and it wasn’t that close. Red Hulk also clearly possesses more power than the regular Hulk, effectively defeating him in battle.

Limitations cap Red Hulk’s potential, however. The Red Hulk literally overheats, sometimes absorbing so much gamma power that it burns off in exhaust. He possibly appears in the MCU given his importance in Hulk lore and connection to the Thunderbolts.

The Gray Hulk emerged again in the form of Kluh, a supremely powerful version of the character that the Hulk had long repressed in his psyche. All anger and raw power, Kluh defeated one of the strongest Avengers rosters ever during the AXIS comic book event back in 2014.

Kluh could also regenerate – something that would become key in later versions – and use telekinesis. He proved immune to telepathic attacks and like some other Hulks in the comics, perceives astral forms. This allows him to see figures in Doctor Strange even when no one else can.

Hulkpool fuses the Hulk’s staggering brute force with Deadpool’s effective immortality. Though the Hulk recently manifested immortality of his own thanks to his journey in The Immortal Hulk storyline by writer Al Ewing, this version remains a powerful Hulk. Hulkpool also harnesses Deadpool’s unrivaled skill in hand-to-hand combat and various weapons.

Hulkpool appeared during the World War Hulk comic book storyline when Deadpool absorbed so much gamma radiation he hulked out. He then goes back in time to kill his original self, possibly a storyline the MCU adapts if it leans into Deadpool’s gonzo nature.

The Immortal Hulk cannot die, resurrecting himself and even reassembling himself after gruesome injuries. The reincarnated Hulk discovers that his power and the power of all gamma-irradiated beings like the She-Hulk comes from a being called The One Below All, and he leverages this knowledge to become the strongest Hulk in the comics in many respects.

Despite effectively becoming a god in recent comics, the Immortal Hulk does obey limits. Cosmic rays weaken him, something that likely factored in his battle against Thanos in the MCU.

Restraint tops the list of Hulk’s greatest powers in Marvel Comics. His ability to rein in his rage prevents the Hulk from escalating beyond control, but the World Breaker Hulk got away from him. He destroyed the entire east coast of the United States of America and would have destroyed the entire planet if given the opportunity.

This Hulk returned to Earth furious after his family was seemingly killed on Sakaar, their deaths the result of the destruction of the ship the Avengers exiled him in during Planet Hulk. World Breaker Hulk easily defeated She-Hulk and was also able to resist the power of Black Bolt of the Inhumans as well as virtually every other superhero on Earth at the time.

Deadpool 3 Will Be Directed By Shawn Levy (Free Guy, Stranger...