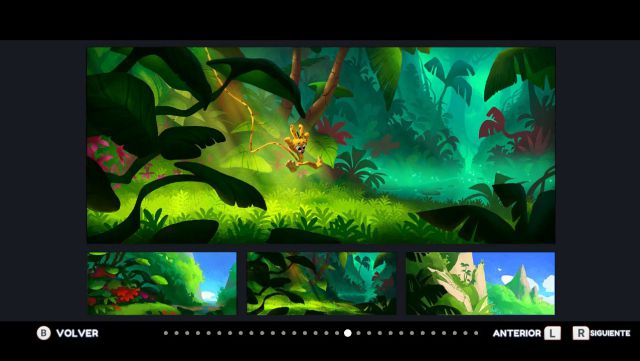 Marsupilami: We analyze the title of Microids, which has a somewhat short campaign, but with mechanics and a design that will interest fans of the genre. The 2D platformer genre is packed with good ideas, great games, and lots of laudable intentions. Not only has it had first-rate references, but the indie world has been able to give it a twist for a long time. It is easy for names like Mario, Donkey Kong, Sonic or Rayman to come to mind as first-rate exponents. Precisely the latter, the one from Ubisoft, is a good starting point to see what Marsupilami tries to do: Hoobadventure, the last installment of the character created by André Franquin almost 70 years ago. And although he has some ‘buts’, he has good intentions.

The title places us in Palombia, the tropical forest where Punch, Twister and Hope live in peace until a ghost that comes from a sarcophagus lost at sea gives off all possible evil and possesses the animals. With this premise, we will choose our character to be able to advance through three worlds with various phases and three confrontations with said enemy until the game ends. The title is not too long, and if we focus on the main adventure in about three hours it can be finished, a couple more if we want to complete 100%. But during these sessions, Marsupilami is able to offer interesting mechanics.

Our advance has the ability to jump on top of enemies’ heads to finish them off, lash out with the character’s long tail and deliver a strong blow by jumping and ramming the ground, like Mario’s longtime ass. So far, all the usual. But the ability to use the glue to hang from different elements on the screen, in the purest liana style, offers an interesting dynamism to the development of the phases. We are not looking at anything new or that we have never seen, far from it; but it is true that the design of the levels is designed so that we can chain jumps, bounces off the wall, jumps on top of enemies and the use of our tail-liana to advance.

Marsupilami does not revolutionize anything, but it has a good level design and that makes it very satisfying for the user. Although finishing the phases is not too complicated -it shows that the game wants to target a younger audience-, there is a certain crumb when it comes to getting all the feathers that are distributed with each level, through which we can unlock a series of extra levels more. His collector’s proposal is designed to revisit the phases more than once to get the feathers, another object and add as many fruits as possible.