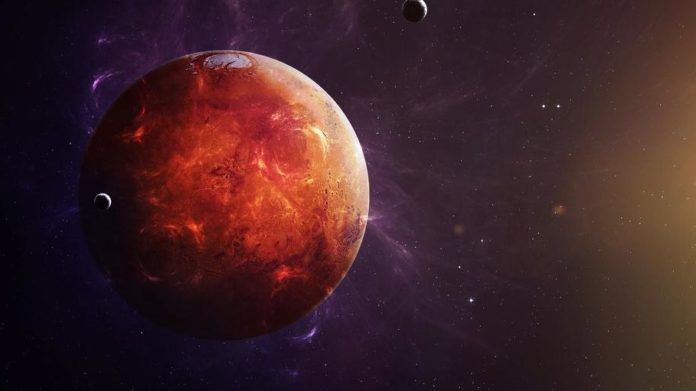 One of the first things that come to mind when it comes to space colony is Mars. A group of researchers think that Mars may have been home to hot springs in the past when plans to establish a human colony on the red planet are discussed.

Mars was hot enough to hold liquid water on its surface billions of years ago. Dorothy Oehler and his team from the Institute of Planetary Science in the state of Arizona, USA, who compared the images of certain areas on Mars with similar-looking lands on Earth, concluded that Mars may have hot springs in the past.

The oval-shaped areas in question were detected inside a crater on Mars. Based on the irregular shapes of these structures and their bright concentric ellipses, the researchers concluded that there are areas where fluid leaks from underground. This hot liquid may have appeared with the effect that creates the crater; This shows how similar-looking spas can be formed on Earth.

The presence of hot springs on Mars:
“If these areas are covered, the presence of these hot water sources could potentially say something about habitable environments for extremophiles,” said Jessica Barnes, astronomer at the University of Arizona. Researchers say the areas in question may be the best places for life on Mars. Although it is not clear whether there is still liquid water under the surface of Mars, there are water molecules on the red planet that depend on the chemical structure of the rocks. Barnes and his team tried to determine where the hot water source came from by examining data from Mars meteorites.

Another way to learn the internal structure of Mars is known to be to examine ice covers, a mixture of frozen water and carbon dioxide. Adrien Broquet and colleagues from Côte d’Azur University browsed radar and altitude data on the subject. “Although the north pole cover is really large, it hardly deforms the surface,” said Broquet.

Broquet noted that this could mean that there are fewer radioactive elements that produce more heat than you might think on the planet. The team, on the other hand, discovered that the north pole of Mars contains about 10 times frozen carbon dioxide than the one found at the south pole.

Instagram CEO explains why they didn’t develop apps for iPad