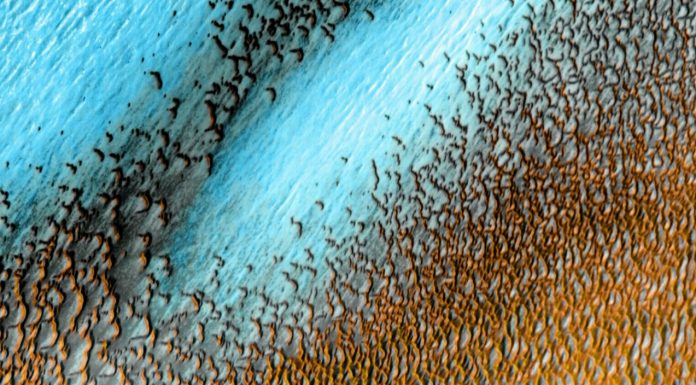 Mars Odyssey celebrated the 20th anniversary of the spacecraft’s release to the planet with a stunning photograph. The photo showing the blue sand dunes from the combination of images captured by the vehicle between 2002 and 2004 from Mars was awe-inspiring.

The photo published by NASA showing the natural view of the dunes has also been on the agenda on social media.

The image published from the dunes at the north pole of Mars covers an area of ​​30 kilometers wide. Blue and yellow colors draw attention in the photo that NASA calls “Blue Dunes on the Red Planet”.

NASA made a statement for the interesting image. “In this false color image, areas with lower temperatures are recorded in bluer tones, while warmer features are shown in yellow and orange”.

It is also stated that the published image is a combination of the images captured by Mars Odyssey from 2002 to 2004.

The Mars Odyssey was recorded as the longest operating Mars spacecraft in history.

Mars travelers like Perseverance and Curiosity are absolutely fascinating. But Mars Odyssey has been orbiting for years, doing the hard work of imaging, mapping, and investigating the red planet.

The orbit tool has helped scientists find water ice on the red planet, and has recently provided the opportunity to take a closer look at Mars’ moons.

Odyssey is named after Arthur C. Clarke’s “2001: A Space Odyssey”. Odyssey is described as an epic name suitable for a long-lived spacecraft.

Cellebrite: know the software used in the investigation of the Henry...