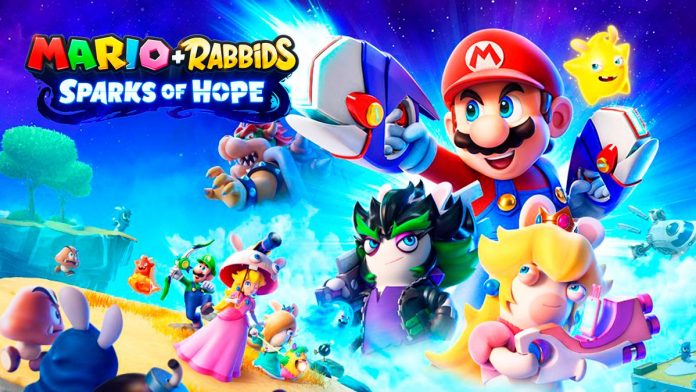 Mario+Rabbids: We interviewed the team behind Mario + Rabbids: Sparks of Hope, the new Ubisoft title coming to the Nintendo Switch family in 2022.The Mario + Rabbids universe returns to the fray with a new installment: Mario + Rabbids: Sparks of Hope. An adventure that brings together Mario, Luigi, Peach and the cute rabbits of Rabbids in the most ambitious project of the franchise to date. Nintendo’s most iconic characters move into the Rabbids family, giving rise to a proposal that maintains the original turn-based tactical concept and thereby adds new interesting characters to the scene. Wanting to know more about this announced sequel to Mario + Rabbids Kingdom Battle of 2017, we have interviewed the responsible team: Davide Soliani (Creative Director) and Cristina Nava (Associate Producer) from Ubisoft studio, Milan. What do we know for now?

Expanding the Rabbids universe: A more ambitious space proposal in every way

In the past E3 2021 we got to see some small previews of Mario + Rabbids: Sparks of hope at the Ubisoft Forward and Nintendo Direct conferences. The French publisher Ubisoft and Nintendo once again join their paths to embark on a new installment in which we will travel throughout the galaxy until we defeat the malevolent entity called Cursa. Davide Soliani: “This is a much bigger, more ambitious project. We knew we had to create something new. Since then we had much bigger ambitions, and we decided to set the adventure in space precisely to give it a galactic, cosmic tone, to do a far-reaching adventure. We take influences from Super Mario Galaxy, but we also do so with many other elements of the Mario universe and worlds. It’s this kind of ambition that has led the development team to expand so much. In the first Mario + Rabbids there were more than a hundred people working on the project, and now that number has tripled, with the involvement of other divisions of Ubisoft ”.

In this new installment Mario and his team (a total of nine playable characters) will also be accompanied by the Sparks, who are Rabbid versions of Lumas from Super Mario Galaxy. These colorful star companions will give each of your fighters an ultimate style super special ability in addition to joining us in combat. Cristina Nava: “The novelties of Mario + Rabbids: Sparks of Hope are many, starting from a much more open stage and set in space. We will see the group of heroes fighting a journey between the stars, visiting all the different planets and which we anticipate will be full of surprises ”.

From the classic fixed camera to the 360º concept

In addition to the particular novelty of the Sparks, there have also been considerable changes in the gameplay. The scenarios will have different coverage, squares and attacks both in short and long distances, in addition to the possibility of rotating the camera 360º. Soliani put it like this: “This installment completely changes the way we design the game. We have enhanced the tactical approach in real time more than ever. We really wanted to rework the combat system to give the player the ability to move the character in real time in any direction (360º) on the battlefield. A reworking of the entire combat system that would add an extra addition to this action. In addition to this fact, we have expanded exploration, expectations by traveling to other planets, improving the combat system, and other new main activities excluding the battles that we cannot yet reveal. For us, the goal is to give the player the very foundation of the adventure. Let him be the one to discover the planet around him, to explore, and that now all this is in his hands ”.