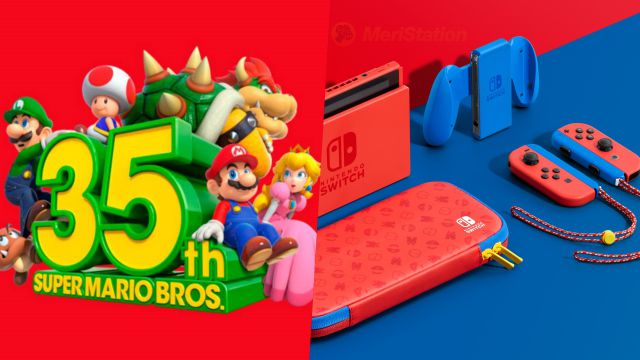 Mario will have a special edition of Nintendo Switch, in which red and blue colors predominate, the plumber’s icon. It will arrive in February.

Mario’s 35th anniversary couldn’t ignore the console itself. The Japanese company has revealed the new version of Nintendo Switch, where the most famous plumber in the video game is the undisputed protagonist.

As we can see in the image, red and blue predominate, Mario’s colors. The Nintendo Switch dock features a vibrant red, the same one it shares on the Joy-Con and on the tablet’s profile. For the first time since its launch in 2017, the colors of the console frame take on a color other than black.

On the other hand, the support of the Joy-Con in the form of a traditional controller, in addition to the adapters, are bathed in the blue of Mario’s outfit. The straps have a loop in which white and red share a place, while the adjustment button is mustard colored. Among the contents that accompany the console, we will have a Mario edition cover with special motifs and a screen protector.

Below we break down the complete contents of the package:

A pair of red Joy-Con.

One pair of blue Joy-Con adapters and white and red straps.

The console will arrive in our country on February 12, the same day that Super Mario 3D World + Bowser’s Fury will go on sale, of which we have already seen its new trailer. Although the price in Spain has not transpired, in the United States it will be offered at $ 299.99, which suggests that the change will be the usual price of the console: 329.95 euros.

PlayStation’s Boss Speaks of a Great Feature on PS5