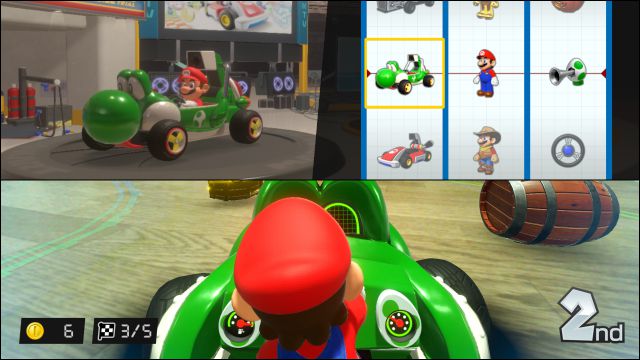 Mario Kart Live: Home Circuit: In total, three new circuits are added, a new Yoshi kart and improvements to the overall performance of the product. The game is available on Switch.Mario Kart Live lives. The curious hybrid between video game and toy released for Nintendo Switch has just been updated with news. Version 1.1.0 makes “general changes to improve the enjoyment of the game”, a fairly standard message that hides the addition of completely new content. Thus the things, the production of Velan Studios – also the creators of Knockout City, releases a new Mario Cup for the Grand Prix mode.

The first of these is called the Slip Circuit, so the black oil impregnated on the ground will have to be avoided. If unsuccessful, players will slip and find that their screen has been temporarily stained black.

The second track is called Barrel Temple and is based on Donkey Kong. On this occasion, the barrels roll around the circuit, so that if the pilot collides with one of the wooden objects, they will inevitably collide. Of course, if he manages to hit one of the gold, he will receive a good assortment of coins.

Finally, Fossil Field (Field of Fossils) takes us to prehistory through a track where we will run into geysers. Those who pass over them will be propelled to the sides of the screen and will end up soaked to the bone.
Another novelty is a Super Yoshi kart, which can be unlocked by beating the Mario Cup in third place or in a higher position.

Mario Kart Live: Home Circuit is a game based on augmented reality, in which players have the opportunity to physically create circuits at home. At the same time, you can also position Mario and Luigi on the tracks, although the title is controlled like a video game.

What can we expect from the Clubhouse app?

The Fantastic Four MCU movie has a new director