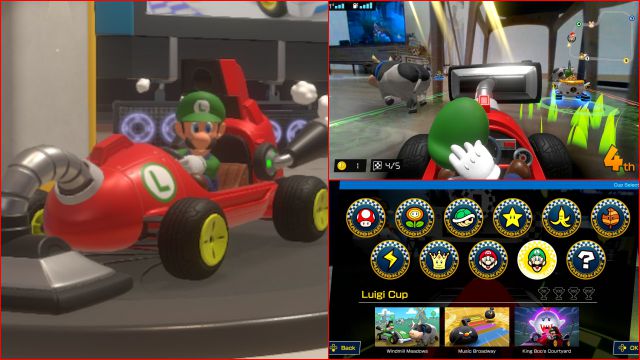 Mario Kart Live: The Velan Studios title receives this new 2.0.0 update to add split screen multiplayer and a new mode called Relay Race. Nintendo has announced version 2.0.0 of Mario Kart Live: Home Circuit, the delivery based on Augmented Reality that was published now a year ago exclusively for Nintendo Switch. Developed by Velan Studios, the video game receives this totally free update that incorporates a new cooperative game mode, the ability to play split screen in multiplayer modes, as well as other content.

Next, we review all the news in this version 2.0.0 of Mario Kart Live: Home Circuit, mainly focused on the shared experience, demanded by many of the original buyers of the title.

Luigi Cup – New cup for Grand Prix mode, with new environments and new types of sectors for creating circuits. A new themed cup.
POLTERGUST G-00 and SPOOKY HORN – New character customization items. We can obtain them by completing certain conditions of the Luigi Cup.
Relay Racer: new multiplayer mode. A cooperative mode where up to four players take turns in a single kart while playing as Toad, Yoshi, Princess Peach, and Mario or Luigi (depending on the kart) against Bowser Jr. and the Koopalings.
Split screen: it is now possible to play multiplayer with two cars simultaneously on the TV. In the past, one player participated on the television and another from the Nintendo Switch screen. Naturally, this mode requires two go-karts and two pairs of Joy-Con or Pro Controller.

This is not the first time the game has been updated for free. Already in July a new cup was added at no cost, thus increasing the content available in the title for all its buyers.

Mario Kart Live: Home Circuit is available exclusively for Nintendo Switch. A title based on augmented reality that allows us to create our own circuits at home by using sectors that act as segments to link the entire route. In addition, each cup is themed with different items and obstacles that give a differentiating touch to the game experience. Races, time trials and multiplayer modes are its main assets.