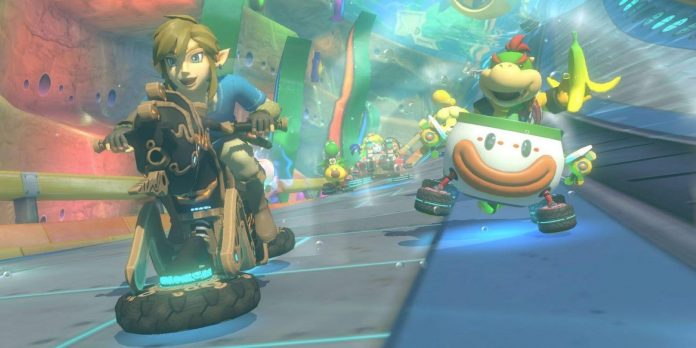 After the latest release of Booster Course Pass and the hype around every upcoming wave, Mario Kart 8 Deluxe continues to thrive on Switch. Its popularity is still alive and well since the appearance of the original Wii U version in 2014. While its longevity seems assured thanks to the new DLC that Nintendo is introducing for Mario Kart 8 Deluxe, speculation has begun to turn to the future of the franchise. and when the fans will see the next part of the series.

Although this has not been confirmed at the moment, there are rumors and stories that Mario Kart 9 is in the early stages of development, which leads many to anticipate what additions or changes may be made to the game, as well as how the new game may be innovative compared to its predecessors. Thanks to Nintendo’s latest efforts to bring old tracks from previous games back to the present, it seems that the studio could be even more inspired by the principles that Super Smash Bros. Ultimate brought in its own development both before and after its release on Switch.

The current situation with Mario Kart

Mario Kart 8 was originally released on the Wii U, but as other studios were leading the industry with next-generation consoles, and the Wii U’s overall popularity and reputation struggled to keep up, the letter seemed to be on the wall. Fortunately, once Switch became Nintendo’s new flagship console, an updated and improved version of the game was released on the platform just a month after Switch launched in 2017, marking the beginning of the current reign of Mario Kart 8 Deluxe. After switching to Switch, the game has lived a long life, especially if you count its days on Wii U, but since most of the new Mario Kart games appear periodically every few years, the new game has high hopes for the players.

The announcement and subsequent release of the Booster Course Pass and its many waves of content have given Nintendo some respite to distract fans before Mario Kart 9 is officially confirmed, if rumors and leaks are confirmed. However, while adding older levels from previous Mario Kart games may buy time for Nintendo, it inadvertently sets the standard that Mario Kart 9 will have to follow. This is where Super Smash Bros. comes in. Ultimate, which can provide a useful blueprint for crowning Mario Kart 9 as the successor it can become.

During the announcement and release of Super Smash Bros. Ultimate game conducted its advertising campaign under the slogan “Everything is here!” In short, the game has risen above the previous parts, in fact, including all the previous content, including characters, levels and much more. The parallels with this are surprisingly similar to what Booster Course Pass does for Mario Kart, relying on retro Mario Kart courses to attract nostalgic fans who are happy to see the previous games get some recognition. If Mario Kart 9 aims to improve Mario Kart 8 Deluxe, as it should be in any sequel, then it should follow the same idea as Super Smash Bros. Ultimate.

This will entail bringing back all the courses, Super Mario characters, bonuses and more from previous games, and then continuing to add even more additional content, as Ultimate did before its release. Thanks to further DLC or Booster Pass, such as extensions for Ultimate, Mario Kart 9 can add even more characters or levels that were not previously in Mario Kart, helping to prolong the popularity of the game and mitigate any problems during development. In general, using the same approach that Ultimate used, as well as relying on the standards of Mario Kart 8 Deluxe and its Booster Course Pass, you can make Mario Kart 9 one of the best games in the series.

What to expect from Mario Kart 9

While blue sky could certainly help create the perfect Mario Kart game for fans, according to current leaks, Nintendo is still in early development and it looks like it already has ideas it’s exploring further as leaks hint at new twists for Mario Kart. 9. Super Smash Bros. Ultimate promised ambitious opportunities for its own franchise, and it’s unclear if Nintendo would be willing to take the same risk for Mario Kart, since previous games focused less on presenting as much content as possible, and instead provided a refined, honed gaming experience.

In addition to this, thanks to the latest games in the Super Mario franchise, Mario Kart 9 has an even wider canon that can promise all-new Mario-inspired power-ups or enhanced vehicle customization. Ultimately, it will be up to Nintendo to decide how it will work with Mario Kart 9, but as speculation grows without any official news, fans are already building up their nerves.

Why did the Finale damage the reputation of the Avengers, and...