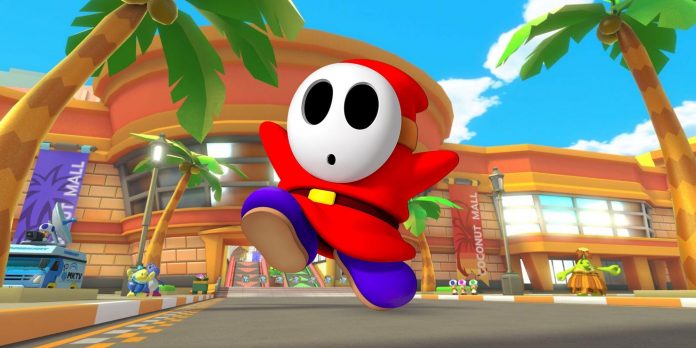 In the latest update for Mario Kart 8 Deluxe, the problem with the Coconut Mall scene that fans have been complaining about since the launch of the DLC has finally been fixed. Mario Kart 8 Deluxe adds 48 new tracks as part of the DLC Booster Course, which fans can either purchase directly or access them through a Nintendo Switch Online + Expansion subscription Pack.

Booster Course add-on adds content to Waves, including 8 tracks distributed across two cups. In the 1st wave of the booster course, the final track of the Golden Dash Cup was Coconut Mall, which originally debuted in Mario Kart Wii. In the original version of the track for the Nintendo Wii, there were NPC machines at the end of the lap that either contained Miis created by the player, or default machines for people who didn’t create a lot of Miis. As soon as the player reached the end of the track, these cars moved forward or backward, acting as an annoying obstacle at the end of the race.

Related: The Open NA 2022 Tournament by Mario Kart 8 — when and where to participate

The Coconut Mall DLC version for Mario Kart 8 Deluxe differs in that it now contains Shy Guys as drivers. When Booster Course Wave 1 was released, fans were disappointed to learn that the cars were no longer moving, but just standing still on the track. The second wave of the Mario Kart 8 Deluxe Booster course is already available, and the official Nintendo of America Twitter page announced the release of an update that fixes the problem with Coconut Mall.

Meanwhile, an update has appeared in Coconut Mall… pic.twitter.com/WXiQhOCLSL

In the updated version of Coconut Mall, cars will now move when playing in multiplayer mode or Grand Prix mode. Shy guys will spin their cars back and forth on the last part of the lap, becoming moving obstacles again. It should be noted that they will not perform this action during the time trial, so players who are trying to beat their record and save ghost data will not have to face any additional obstacles. This means that Coconut Mall has become one of the best DLC tracks for Mario Kart 8 Deluxe.

DLC for Mario Kart 8 Deluxe adds a lot of new content to the game, returns classic tracks that haven’t been around for many years, presents tracks Mario Kart Tour is in the main series and even presents completely new stages. It’s nice to see that the existing tracks are also being updated, as many people were unhappy with the changes made to Coconut Mall in the first wave. Now that Coconut Mall has received its important update, fans can now curse the developers for their diligence. when they crash into the Shy Guys free ride at the end of the stage. All the new Mario Kart 8 Deluxe Wave 2 tracks are just fantastic, but after the Coconut Mall update, it’s worth trying again.