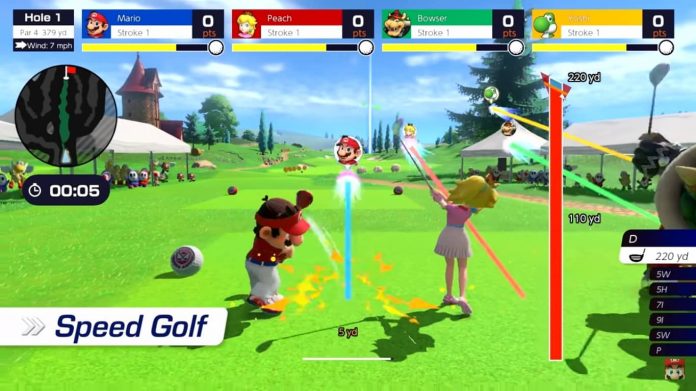 Mario Golf: Super Rush: King Midas, one of the main characters in Greek mythology, was known in history as the leader who turned everything he touched into gold. In the gaming world we can create an analogy similar to the Mario Bros franchise.

Whenever we find the insertion of the Mario element in a video game, the possibility of it turning into gold is very high. Over the last few decades we have had as a great example Mario Kart, who transformed the way of having fun on the racetrack.

We can even diversify the genres, such as Dr. Mario, who joined the mustache to puzzle style and Mario + Rabbids Kingdom Battle, which mixed two distinct universes in a super game of turn-based strategy.

Our great Mario ventured back into sports during the arrival of the Nintendo Switch. Games from the past have received new versions, such as Mario Golf: Super Rush. But is the Midas of games still turning everything into gold? That’s what we’ll find out later.

If you talk to most people who play video games and are into Mario, you can be sure they’ve already ventured to golf courses at least once. Many of them may even hate the sport, but they must have already given the game a chance.

Leaving the gaming world a little and going into the sporting environment, it is difficult to find someone who enjoys golf, who understands all the rules and details of the world circuit. But know that it is a widespread sport around the world, no matter how elite it is.

Incredibly, the rule of golf is quite simple. Whoever manages to put the ball in the holes with fewer strokes wins. Along each hole there is an average of ideal shots, which are determined as “par of the course”. If you do the above, you can be sure it’s not going well.

The fewer shots you can get under “field par” the better. Of course this does not mean a certain victory, as other competitors can reach their number of shots, making the match much more disputed.

Mario Golf: Super Rush is not just a golf game with Mario Bros. elements. The title tries to innovate in several aspects, bringing new game modes, online and multiplayer, and even a career mode, with RPG ingredients.

In addition to the traditional 18-hole shots, a few different modes catch our attention. The first one is Battle Golf. It resembles a battle royale. In it, you will need to pocket the ball in the hole more times than your opponents in a given game time.